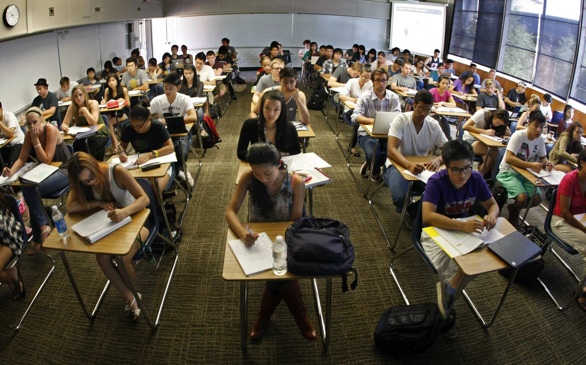 A greater percentage of California community college students were scheduled to pass remedial math and English courses last year but fewer were finishing school or transferring, according to statistics released this week.

College officials blamed the drop on a decrease in state funding, which led to fewer classes.

“The fact that our completion rate slipped by only this margin is a testament to the perseverance of these students and the colleges that worked heroically to educate as many of them as possible during those grim economic times,’’ said Brice W. Harris, chancellor of the state community college system.

The percentage of students who passed remedial math, English and English as a Second Language courses all increased slightly.

The information was released as an update to the Student Success Scorecards that detail student outcomes at all 112 of California's two-year colleges.

The scorecards also include demographic and other academic information. They were first released last year as a way to help students pick the right campus for them and to push institutions to improve.

Campus News
In the Noah’s Ark of citrus, caretakers try to stave off a fruit apocalypse
93 views

Campus News
USC offers free tuition to families making under $80,000 and a break for homeowners
61 views