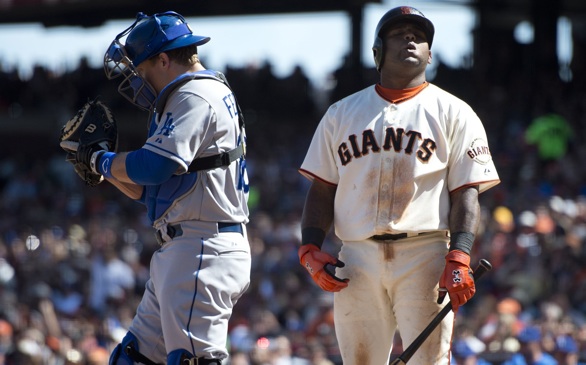 Giants' Pablo Sandoval reacts after being called out on strikes in the eighth inning.
(Credit: Jose Luis Villegas/Sacramento Bee/MCT)

AT THE PLATE: Hanley Ramirez, who was struck in the hand with a 90-mph fastball the previous night, was out of the lineup. However, Ramirez said he expected to play when the Dodgers open a three-game series Friday against the Arizona Diamondbacks. With Ramirez still sidelined, the Dodgers were limited to seven hits. Of them, two were by Adrian Gonzalez, who extended his hitting streak to 12 games. Gonzalez's fifth-inning single drove in Justin Turner to double the Dodgers' lead to 2-0. The Dodgers scored their first run in the second inning, when catcher Tim Federowicz drove in Scott Van Slyke.

ON THE MOUND: Hyun-Jin Ryu was dominant again, tossing seven shutout innings for the second consecutive start. Ryu limited the San Francisco Giants to four hits and a walk. Ryu paid tribute to victims of the ferry disaster in his native South Korea, replacing the name plate above his locker with a sign that read: "Sewol 4.16.14." Ryu said, "It's a really unfortunate situation. I know all the citizens in Korea have a very heavy heart right now. I thought if I could win today and pitch well, maybe we could give them a brighter side to think about." Kenley Jansen recorded his fifth save, but gave up a run in the process.

WELCOME BACK: Setup man Brian Wilson pitched for the first time since activation from the 15-day disabled list two days earlier. The Giants had men on first and second base with one out in the eighth inning, but Wilson struck out Pablo Sandoval and forced Buster Posey to fly out to center field.

EXTRA BASES: Clayton Kershaw continued to intensify his throwing program, as he threw breaking balls off the mound for the first time since he landed on the disabled list.