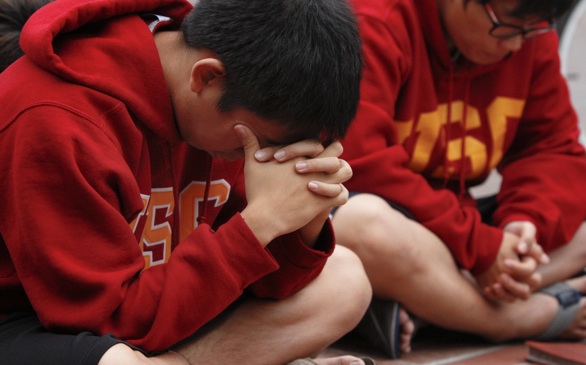 Students pray near the site on campus where four people were shot in 2012.
(Credit: Mark Boster/Los Angeles Times/MCT)

Twenty-one-year-old Brandon Spencer has been sentenced to 40 years to life after being convicted of attempted murder, reports the Los Angeles Times.

Spencer was reportedly in tears and sobbed uncontrollably when he heard his sentence.

In 2012, Spencer allegedly attended a Halloween party on the USC campus and opened fire, injuring four people (who were all non-USC students).

Spencer reportedly told the judge, "I’m sorry for what happened but I can’t spend the rest of my life in prison. I’m not just some gang-banger that they portrayed me as.”

What Spencer was referring to is the belief that he came to the campus with a gun after he identified a member of a Crips-affiliated gang, a rival gang.

Prosecutors believe Spencer shot at the alleged gang member in retaliation, because he was allegedly wounded a year earlier by a rival gang member.

Spencer will serve his sentence concurrently, meaning he will be eligible for parole.