Harrison Ford: The Veteran Actor Proves he’s Still in the Game with Firewall 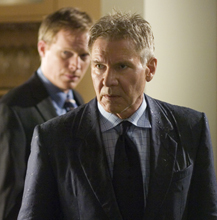 Untitled Document "I make it not about computers. I make it about people," says Harrison Ford about his latest role in the hi-tech thriller Firewall, which revolves around Jack Stanfield (Ford), a computer security specialist at a Seattle-based bank.

After spending decades building a career as a trusted insider fighting cyber-theft in the finance industry, Stanfield and his architect wife (Virginia Madsen) settle into the accoutrements of suburban life while raising their two children. Although the security system he helped devise has proven impregnable for hackers, Jack doesn’t realize that he is a living, breathing software backdoor that could compromise his company’s electronic securities stronghold. Enter Bill Cox (Paul Bettany).

As the story maintains, Cox is well aware of the fact that Jack is the bank’s proverbial Achilles’ heel and initiates a well constructed plan to exchange Stanfield’s kidnapped family for the sum of $100 million. Caught in a catch-22 situation, Jack has no choice but to comply and rob the bank while pretending to do his job – or does he?

The subject of cyber-theft has been told before in various ways, but once the keyboards start clacking, many become lost in the tech-babble. Ford explains what differentiates his new film from its predecessors. "The computer’s a mechanism but the story involves people – people’s emotions, people’s understanding, people’s gaining knowledge, people’s attention – that’s why we were running out of paper for the printer in Clear and Present Danger ... details of humanity [are important to the thrust of the story]."

As the story flows, Cox’s plan to electronically rip off the bank appears to go off without a hitch as he takes great lengths to keep Ford’s character quiet while completing the inside job that will ensure his family’s safe return. When asked what would he do in the same circumstance in real life, Ford is succinct. " I have no idea and neither do you. Nobody does ... you don’t know and I don’t know until you come to that [critical] moment of what’re you going to do?"

As mentioned above, Jack’s nemesis, Cox, is portrayed by the British-born Paul Bettany – introduced to American audiences with his role in A Knight’s Tale – who does a memorable job as the flick’s cunning and ruthless dirtball. "He’s a remarkable actor," says Ford of working with Bettany. "He has all of the tools – the whole kit. He’s got really solid intellectual equipment and knows how to understand a story … We were playing a game of catch in a lot of the scenes and he pays attention. He knows how hard to throw the ball back. He knows how to work."

Ford has starred in dozens of popular films since breaking through as Bob in 1973’s American Graffiti. Most of his more successful outings – 11 of which have grossed over $100 million, coincidentally – have been action-adventures which might make one think that the actor’s drawn to the genre. As Ford would have it, such is not the case this time around.

"This is not a physical movie – it’s a movie about suspense and tension. It’s not an action film, its a thriller with a brief bit of action," he says. "I like to participate in a variety of different genres. I want to work on the best dramatic material that I can and it often happens that when you tell stories of conflict between characters, it comes to a physical confrontation. That is the nature of film."

Ford doesn’t mince words about why he’s still in the acting game. "I’ve spent my life acquiring some understanding of the process. Because it’s challenging to me. Because I get to participate as an actor in filmmaking, which is a group activity and I like working with people on a problem," he says before deadpanning and beginning to laugh. "And because they pay me money to do it."

Firewall is currently in theatres.
Article posted on 2/13/2006
This article has been viewed 13243 times.