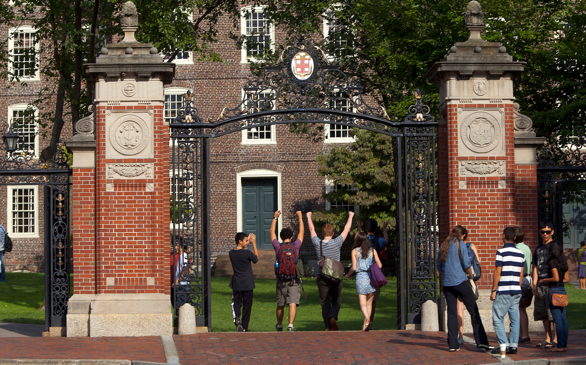 Throughout the arduous college application process, Brown University was on the top of Madeline Anderson's wish list. So when the Long Beach high school senior received a rejection from the Ivy League campus, she was disappointed but also knew she had tons of company.

The Rhode Island campus accepted just 8.6% of the 30,432 students who had applied for freshman admission, a historic low and down from 9.2% last year.

Many other elite colleges across the country also reported dips in their acceptance rates, fueled by a rise in applications from overseas, particularly Asia, and by a trend among high school seniors to try their luck at more schools, experts say.

"It did make me upset at first. I knew it was not meant as a personal blow but at the same time it was my dream school of sorts and it didn't work out," said Madeline, 17, who has strong test scores and grades from Woodrow Wilson Classical High School. Yet she understands that top-tier colleges "have so many applications to choose from, it almost seems random."

After being accepted at five of the eight schools she applied to, Madeline is trying to choose between Chapman University in Orange and the University of Richmond in Virginia, possibly to double major in art history and business.

A demographic decline in the number of high school graduates in California and nationwide is expected to make it a bit easier to gain admission to many respectable colleges this year, especially those without wide international name cachet.

But the hunger to land at the most brag-worthy campuses continued to grow this year, aided by the ease of the online Common Application adopted by more than 500 campuses.

Competition for a prestigious diploma was most dramatically evident this year at Stanford University, which accepted only 5% of it 42,167 applicants, the smallest share in the school's history and thought to be the lowest in the nation.

Stanford's Richard Shaw, dean of admission and financial aid, said his campus was not purposefully trying for such a low acceptance rate. "I don't want anyone to think we are boasting about this," he said.

Stanford's rate has steadily declined from 20% over the last two decades as application counts tripled. This year, applications from foreign countries rose faster than those from the U.S., according to Shaw, who declined to release statistics on those groups.

Other prestigious schools also reached new lows in acceptance rates. Those included Yale, 6.3%; University of Pennsylvania, 9.9%; and Pomona College, 12.1%. The most competitive UC campuses saw drops too: to 17.3% at UC Berkeley and 18.2% at UCLA. However, Harvard's acceptance rate rose from 5.8% to 5.9% because of a slightly smaller applicant pool. Columbia, Dartmouth and the University of Chicago were among others that saw declines in applicants.

USC accepted 17.8% of 51,800 applicants, compared with 19.8% of 47,400 last year. Timothy Brunold, dean of admission, attributed the jump in applications to the trend of students applying to more colleges and being increasingly willing to enroll far from home. About 17% of the applicants, and of those accepted, are from other countries, he said.

While colleges like being popular, heightened competition "certainly does add to the hysteria that surrounds this process," Brunold said.

Katy Murphy, president of the National Assn. for College Admission Counseling, said too many American and foreign students try to get into very elite schools for which they don't have a chance. Some parents see a child's acceptance at a prestigious campus as "a validation" and don't consider whether that school fits their child, said Murphy, who is director of college counseling at Bellarmine College Preparatory high school in San Jose.

She and other experts urge students to look beyond the hottest names. The average acceptance rate was 64% among 1,239 four-year, nonprofit colleges, according to 2012 federal data compiled by Murphy's group. This year, those included Boston University, 34%; Santa Clara University, 48%; Loyola Marymount, 52%; Purdue University, 57.6%; and the University of Arizona, 70%.

Only about a dozen colleges accepted 10% or fewer of their applicants and about 40 took 20% or below in 2012. Officials think those numbers are probably close to those this year.

Another Wilson senior, Gabriela Lund, 18, had Stanford at the top of her list of seven schools, but was denied there and at UCLA and USC. An excellent student who is active in dance and theater, she has decided to attend UC Berkeley over UC San Diego, Fordham University in New York and Cal State Long Beach. A bonus is that UC tuition is lower than at a private school and she won't have to worry about financial aid.

"I'm really happy at the way things turned out," she said.

Eagle Rock High School senior Sarah Sollesa applied to 19 colleges, a mixture of UC, Cal State and prestigious private campuses. She was accepted at 10, wait-listed at two and rejected at seven, including what had been her first choice: Tufts University in Massachusetts, which admitted just 17.4% of applicants.

Looking back, Sarah, 18, said she wishes she had more closely evaluated colleges and applied to fewer. "It was a lot of stress. I wasted a lot of time on schools I wouldn't have attended," she said. Now, trying to decide between UCLA and UC Berkeley by the May 1 enrollment deadline, she feels she is "in a good situation in my choices. I'm not complaining."

Students and families should not assume that being admitted to the most exclusive 40 colleges guarantees success in life or that being rejected means failure, said Hector Martinez, college guidance director at the Webb Schools in Claremont. Hundreds of good colleges can be excellent launching pads, he said.

"Ultimately, it's what you do in college, and how well you do it, that will count in the long run, not just the name or ranking of the institution," he said.