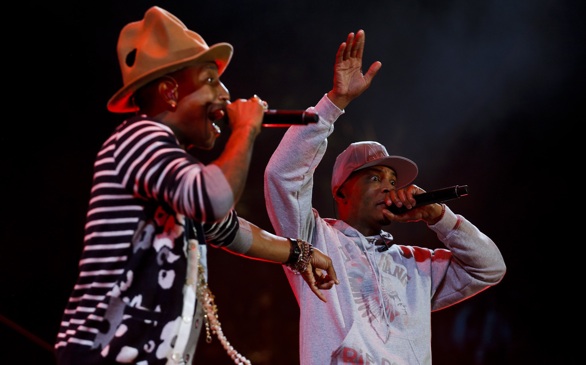 INDIO, Calif. — As the second and final weekend of the Coachella Valley Music and Arts Festival was in full swing, Lauren Mayberry of rising electro-pop trio Chvrches assured attendees that they had made the right choice. “You guys are lucky,” she said midset Saturday. “Last week was a rehearsal.”

She wasn’t the only one thankful for a do-over.

A reunited OutKast completely revamped its Friday night set, delivering a livelier and more streamlined performance, one that did away with guests and didn’t back-load the hits.

Pharrell Williams, who one week ago accused the sandy desert winds in Indio of wreaking havoc on his voice and stage production, declared himself a victor over the elements.

“The desert got me last time, but not this time,” Williams said.

The Goldenvoice-promoted festival on Sunday closed its 15th year overall, its third as a dual-weekend event. And while artists on Weekend 1 were feeling out how best to play to daily crowds estimated at 90,000, by Weekend 2, it was clear to those festival-goers that the event has settled into an increasingly upscale formula.

For many, Coachella has become a three-day vacation for which passes start at $375 and VIP options can stretch into the thousands. As an experience, Coachella in 2014 catered heavily to its big spenders, adding four-course dinners and $10 craft beer — all far removed from the main stages. It’s a stark evolution for the festival, which has long celebrated genre-hopping underground heroes.

Coachella’s southwestern corner has long been monopolized by the dance-focused Sahara Tent, an impressive hangar that seemed like it was built for more than a few retired NASA space shuttles. There was no denying that this was the main draw for much of the weekend. It was a full-on sensory assault, with video screens to the left, to the right, to the front and above, and if you timed your visit right, you just might have witnessed the crowd going nuts as the rigs of ceiling lights rose and fell.

There was show-stopping music to be had in here. Fatboy Slim, who in the mid-‘90s helped popularize what has become known as modern electronic dance music, showed a sense of humor by dropping in standards such as “Let It Snow” amid soul-shaded big beat hits such as “Star 69.” Skrillex, one of the poster boys for modern dance, was even more absurd, sitting atop what looked like a spaceship designed by a motorcycle gang while connecting the dots between his deep bass and deep reggae collection.

The Sahara Tent could be exhausting — and occasionally frightening. Dillon Francis, who was hailed as the “future of music” last week by highly regarded producer Diplo, sounded like the Internet at its worst, with beats like relentless pop-up ads and whatever music is popular on YouTube treated to a jackhammer.

Perhaps this sort of pop-music remixing is what Win Butler of headliner Arcade Fire, a band increasingly experimenting with bringing dance music into a rock setting, referred last weekend. He ended the group’s Sunday set with a “shout-out to all the bands still playing instruments at this festival.”

But artist quibbles aside, there were genuine concerns surrounding the Sahara, especially when passes cost about as much as three days at Disneyland. Leaving the Fatboy Slim set on Saturday put you in a shoulder-to-shoulder funnel of people in which any change in direction was impossible — and one twisted ankle could trigger a trampling.

When Coachella was an upstart festival in the early 2000s, issues with crowd management were forgivable. But at a premium event for which general admission is about $100 more than its major U.S. competitors, such old rock ‘n’ roll grit doesn’t exactly carry a romantic nostalgia.

Those who were fans of rock music, however, generally did have plenty of space to roam. The Afghan Whigs kept things dark and aggressive Friday, while the always-scrappy Replacements, forebears of modern indie rock, took a cynically hilarious approach later that evening. Leader Paul Westerberg played his guitar while lying on a couch, turning vocal duties for much of the set over to Billie Joe Armstrong.

Westerberg said he had a sore back, but it also could be viewed as a commentary on how Coachella and summer festivals in general are more often aiming for these kinds of moments — R. Kelly with Phoenix at last year’s Coachella, or Jay Z with Williams and R&B and hip-hop artist Lauryn Hill with rapper Nas at last weekend’s event.

Expectations for these “only-at-Coachella” moments have been raised, and the Replacements, whose set was said to be woefully under-attended a week ago, found a way to interject themselves back into the news cycle.

What’s lost in all this talk of celeb-driven performances and posh amenities are the desires of, say, the fan who doesn’t want either.

No problem if you’re a devotee of the groovy trance-rock of Warpaint or the smoky electro-R&B of Banks, locals who were among the Coachella highlights. They’ll be back. It’s not clear on some of the rest.