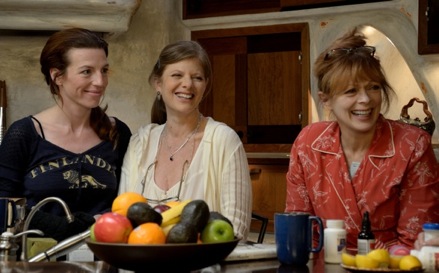 From L to R: Tanna Frederick, Frances Fisher and Eliza Roberts in The M Word
(Credit: The Rainbow Film Company)

It’s a word that invokes fear and dread in those who don’t understand it. In fact, most prefer to skirt around the subject or simply ignore its existence all together.

But for women, it’s the light—or the darkness—awaiting them at the end of the tunnel. It’s hot. It’s loaded with hormonal dysfunction. Yes, it’s menopause.

For a phenomenon that is so universal and entirely inevitable, it’s a wonder that this subject hasn’t reached some kind of limelight in today’s vast media world. Sure, it’s a sensitive and overtly personal topic, but when the big screen is saturated with depictions of love, war and everything in between, this little nugget (which embodies a gargantuan change in not only women’s lives, but also all those close to them) seems to have been left out in the cold.

Cult director Henry Jaglom’s The M Word brings light to menopause with humor and genuine care that is purely Jaglom-esque.

In the film, a LA-based TV station falls under the scrutiny of its big corporate counterparts. Moxie (Tanna Frederick), one of the station’s staple actresses, pitches a documentary series that spotlights the menopause experience. She believes that a subject so untapped yet so relatable will attract the viewers the station needs to keep itself afloat.

Complications arise, however, when Charlie and Moxie start getting romantically involved. Even though Moxie’s job is now secure, especially with her new beau in tow, her beloved coworkers (many of whom are middle-aged women experiencing menopause) are being put under the corporate microscope without Moxie’s attention.

Since the early ‘70s, Jaglom has mostly focused his creative intentions on the intimate and ever-complicated elements of womanhood. According to star Frederick, who has worked with him on six films and four plays, Jaglom spent much of his childhood tagging along with his mother and her girlfriends to beauty salons, inevitably soaking up the unfiltered talk between women.

And from watching Eating, Going Shopping, Baby Fever and Irene in Time, it’s apparent that the man has an undoubtedly keen eye for the estrogen-infused world.

By combining the narrative with the actresses’ genuine unscripted testimonies concerning their own unique experiences with menopause (ranging from tales of crazed hormonal imbalance to complete sexual apathy), The M Word brings an elevated level of honesty and compassion to something that is often shooed off as being a taboo subject.

Just like her voraciously passionate character Moxie, Frederick feels a film like The M Word is necessary “to see what kind of therapy or dialogue it sparks between people going through menopause and their family members.”

Only until recently have audiences embraced women’s gross-out humor, especially when it comes to vaginas (ah!), in films such as Bridesmaids and shows such as “Girls” and “Broad City.” As Frederick explained, it’s vastly important that the word finally gets out.

“[The M Word] is my favorite so far, because I like to make films that help people or create change in society no matter how big or small. Create good change, better change and open people to feeling good about themselves. I love making movies that somehow make that happen,” said the actress.

To encourage such an important creative shift, Jaglom and Frederick find it imperative to generate a safe environment for everyone on set—one in which everyone gets their voices heard and are willing to do things outside of their comfort zone.

Even veteran Imperioli of “The Sopranos” fame found himself letting loose to a point where he lost himself.

“I don’t even know exactly what I did in the movie. When you’re that committed to the moment, I mean, I don’t remember anything I really said. It just comes out of thin air. It’s not something you really focused on and learned and thought about —it just happens,” recounted Imperioli.

This spirit is a staple of Jaglom’s directing style, which involves a meticulously thought-out story. However, when the actors feel so open to freely create and spontaneous riffs take place, the story takes on a whole new life apart from the scripted page.

Indeed, it’s hard to imagine much of The M Word existing on a page, for it embodies an unprompted appreciation of open expression. Similar to Robert Altman, Jaglom is seen as an actor’s director, willingly and constantly adapting his art with the whimsies of those bringing it to life.

It’s all too easy to assume audiences will shutter at the sound of a film about menopause, but hopefully after a closer look, both men and women will find something worth getting hot flashes over in Jaglom’s The M Word.

Win passes for you and a guest to attend an advance screening of The M Word on Thursday, April 24, by clicking here!