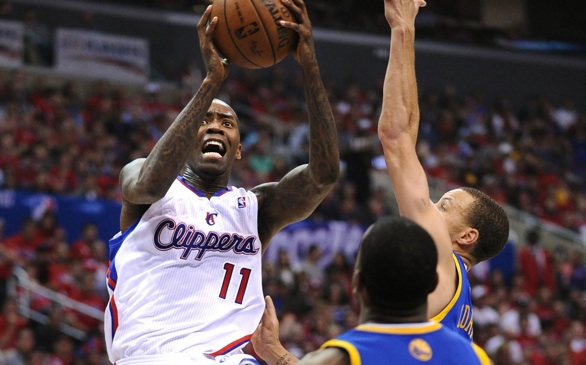 Here are five takeaways from the Clippers’ 138-98 victory over the Golden State Warriors on Monday night at Staples Center in Game 2 of their first-round playoff series that evened the series at one game apiece heading into Game 3 on Thursday at Oracle Arena in Oakland:

1. If Blake Griffin keeps playing like this, the series is over. The Clippers forward unfurled the inverse of his Game 1 clunker, scoring 35 points in only 29 minutes with stunning efficiency. He made 13 of 17 shots, scoring in a variety of ways — backing down overmatched defenders for layups, muscling in for tip-ins, rising for jumpers, making his free throws and yes, throwing down a few dunks. Griffin led the fastbreak on several occasions and committed zero fouls two days after fouling out in only 19 minutes. He also made nine of 10 free throws and was able to sit out the entire fourth quarter with his team so comfortably ahead. Golden State will need to try a new defensive approach in Game 3 or risk further embarrassment. Here's guessing Warriors Coach Mark Jackson also will give officials an earful about Griffin not being called for one foul in a physical game.

2. The Warriors cannot win without Stephen Curry’s splish to Klay Thompson’s splash. Curry was a nonentity in the first half, scoring only four points on one-for-six shooting, including misses on all four of his three-pointers. He ended up with 24 points, finally scoring in bunches after the Clippers had extended their lead to such laughable margins it felt like they were playing the Lakers. Curry doesn’t stay cold for long, though, so the Clippers must expect to withstand a big showing in Game 3.

3. The Clippers’ bench lives! Danny Granger led a breakthrough effort by the Clippers' reserves with 15 points on six-for-10 shooting, including three of four from beyond the arc. Hedo Turkoglu added 13 points and Darren Collison had 12 as the Clippers bench outscored its Warriors counterparts, 58-48. Clippers Coach Doc Rivers deserves a big assist here by recruiting Granger, Turkoglu and Collison to join his team when they all could have gone elsewhere. Clippers guard Jamal Crawford also broke out of his shooting slump by making four of eight shots.

4. DeAndre Jordan figured something out with his free throws. Looking more confident than he has all season, the Clippers center stepped up to the line and made seven of eight free throws — a success rate of 87.5% that more than doubled his season average of 42.8%. It probably wasn’t a coincidence that Jordan did this on the day he finished third in voting for the NBA’s defensive player of the year behind winner Joakim Noah and runner-up Roy Hibbert. His knockdown effort should give the Warriors pause if they contemplate using a hack-a-Jordan strategy in the series.

5. Rivers’ sideline presence instills confidence in the Clippers. The Clippers coach was unafraid to match Golden State’s Jermaine O’Neal word for word when O’Neal kept mouthing off to Rivers’ players, resulting in technical fouls on O’Neal and Rivers. The coach’s commanding presence seems to boost his players in difficult situations and gives them the belief they can persevere through any challenges. It’s a huge X factor in the Clippers’ favor.