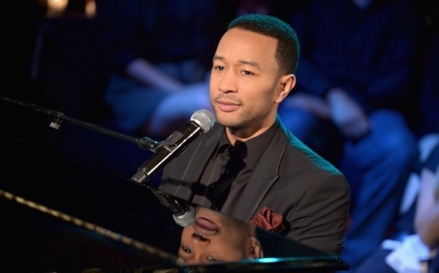 Looking as dapper as ever, John Legend performed in the middle of a packed venue.
(Credit: Getty Images for MAC Presents)

John Legend isn’t the type of performer who will get the crowd on its feet, dancing, raving and rocking out to blasting tunes. In fact, he does quite the opposite.

A Legend show is best experienced sitting down, so one can absorb all of his lyrics and get lost in the melodies. It's all about intimacy, smoothness and a heavy dose of romance.

That's what much of the audience experienced Monday night at the Emerson Theater in Hollywood, where the singer-songwriter performed some of his old hits sprinkled on top of his newer stuff.

The concert was dedicated to Citi ThankYou® Cardmembers, who were able to get tickets to the performance by purchasing them with a Citi ThankYou credit card (Citi offers cardmembers exclusive access to concerts, sporting events and other entertainment gatherings). All of the concert’s proceeds went to Teach for America, a program that’s dedicated to improving education at disadvantage schools.

As soon as attendees walked into this hidden gem of a theater, they could see that this performance was going to be extremely intimate. Soft lighting filled the small-ish venue, candles and flowers sat atop the tables near the couches (some of which were literally just a few feet away from the singer!), and a piano stood right in the middle of the room, waiting for Legend to take his seat.

Concert-goers scrambled to get a drink at one of the two bars, pushing through the crowds that got bigger and bigger. Those who didn’t have a couch or table reserved wandered around the venue, looking for an appropriate space to stand and get a good view of the nine-time Grammy Award-winning star.

Once the audience got situated with their drinks in hand, Legend descended from the stairs to a full applause and sat down at the piano.

The musician beautifully went into each song, singing as his fluid fingers flew across the piano keys. The audience swayed during “Tonight (Best You Ever Had)” and sang along to “Used to Love U.” “Green Light” and “Ordinary People” were obvious crowd pleasers, and he even took a song request from the audience (“P.D.A. (We Just Don’t Care)) that got many people clapping.

Before launching into “You & I (Nobody in the World)” Legend mentioned his wife, model Chrissy Teigen, noting that even without all of the makeup and fancy clothes, she’s still beautiful (causing many females in the audience to deliver a synchronized “Awww!”).

Throughout the entire night, one could not help but think about how perfect Legend’s show would be for a romantic date night. In fact, there were quite a few couples in attendance, most in the 21-to-34 age range. Numerous ladies were spotted leaning their heads on their guys’ shoulders, and guys were wrapping their arms around their dates’ shoulders and waists. And of course, some occasionally kissed one another on the cheek or forehead.

And then, just when standing upright for more than hour started to get the best of this reviewer, Legend closed the show with current hit, “All of Me,” much to the crowd’s delight. It was the perfect way to end a very entertaining, yet somehow soothing, set.