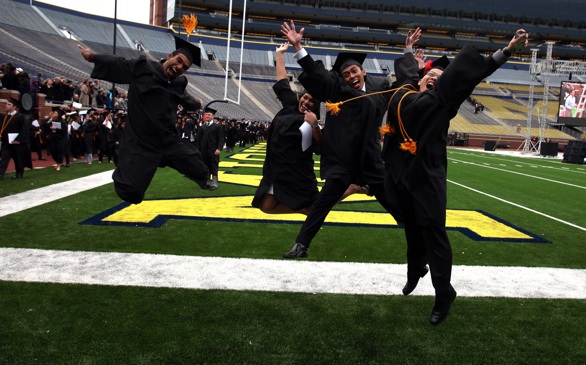 A large number of California adults have attended college but have not managed to obtain a degree, according to a new report released Tuesday.

Nearly 22.5% of the state's 20.2 million adults age 25 to 64 have attended college and have earned credits but no degree, according to the report by the nonprofit Lumina Foundation.

That number, about 4.5 million adults, exceeds those who have obtained a bachelor's degree (about 4.1 million) and high school graduates (nearly 4.1 million.)

Many of these students say they want to complete a degree, which would probably earn them more pay and help the state meet future workforce needs.

"If California can increase the percentage of adults with meaningful post-secondary credentials, it will pay enormous dividends to the state and to the individuals who call California home," said Jamie P. Merisotis, Lumina's president and chief executive.

Overall, the state has made some progress in increasing the number of adult degree holders, with 39.7% of working-age adults holding a two- or four-year college degree in 2012, up from 38.9% in 2011.

California ranks 23rd among states in college attainment, trailing the leader Massachusetts, where 50.5% of adults had attained a degree.

Nationally, about 39.4% of working-age adults held at least an associate's degree in 2012, according to the report, which uses Census and other data.

"Attainment gaps by race and class are troubling in California and across the country," said Merisotis, who suggested that higher education systems must be redesigned to provide more opportunities across racial, ethnic and socioeconomic lines.

Gov. Jerry Brown and others have pressed colleges to offer more online education as a cost-saving way to serve more students.

Despite being home to some of the smartest minds in technology, the state no longer leads the way in education innovations, such as online offerings, redesigned courses and the use of skills and knowledge obtained outside the classroom to complete degrees, said Dewayne Matthews, Lumina's vice president of strategy development.

"Where California does lead the rest of the nation is in what is happening to students of the future, with more and more students the first in their family to attend college, Latinos, immigrants and working adults," Matthews said. "We need to innovate to find ways to serve these students more effectively."