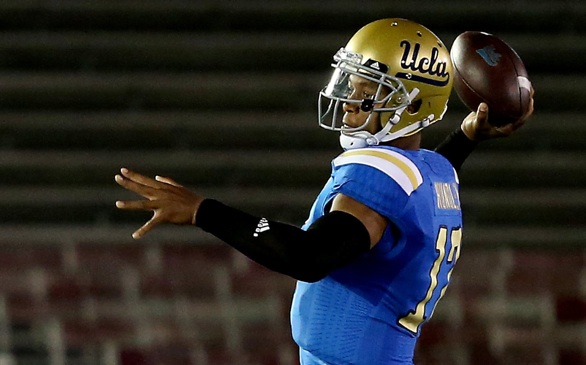 The two have spent the last three weeks working with an offensive smorgasbord. The Bruins seem deeper at the skill positions than they have been in more than a decade.

Mazzone, in fact, can't pinpoint when he has had it so good.

"It has been awhile," Mazzone said. "For the last several years, I have been shopping at 7-Eleven. Now I feel like I'm at Costco."

The Bruins have four running backs they can rotate. But the real bulk is at receiver.

The Bruins have returnees such as Thomas Duarte, Devin Fuller, Jordan Payton and Devin Lucien, who combined for 113 receptions. Speedster Kenneth Walker has returned from a back injury. There are talented newcomers Eldridge Massington and Mossi Johnson, as well as second-year players Jalen Ortiz and Darren Andrews looking to increase their roles.

"We have so many weapons, we can rotate them and I'll never throw it to the same guy," Hundley said. "I can sit back there and no matter who I go to — the tight end, outside receiver, slot — we can exploit any matchup."

The trick, it would seem, will be to keep everyone happy.

Not a problem, Mazzone said.

"We're not a selfish team at all," Mazzone said. "They see the big picture. The style of offense lends itself to the ball getting distributed. You never see us with one guy with 100 catches. Everybody will be right around 40-60 range."

"Every receiver wants to be the guy," Payton said. "That's how we prepare."

Jayon Brown has made use of his opportunity

The Bruins were light at inside linebacker this spring, with Eric Kendricks and Cameron Judge recovering from shoulder surgeries. They were even lighter when Isaako Savaiinaea sat out a week because of a shoulder injury.

It meant more time for Brown, who will be a sophomore.

He played in all 13 games last season, but mostly on special teams. He was selected Pac-12 Conference special teams player of the week after forcing one fumble and recovering another against Colorado.

But his size, 6 feet and 220 pounds, made him a "tweener." Brown tried out at safety before moving back to linebacker last fall.

"Miami had those type of linebackers in the 1980s and 90s, guys who were undersized, but unbelievable athletes," defensive coordinator Jeff Ulbrich said. "They were guys who played with a chip on their shoulder and seemed bigger than they were."

Brown knew he needed to show he could compensate.

"It's a mindset, knowing that I'm not the biggest linebacker, so you have to be more physical and more elusive," Brown said.

He has accomplished that.

"He's a little bit of a pain out there, hitting people late, running around with that attitude," Ulbrich said. "He is one of our most physical guys even though he's undersized."

Improving during the off-season was lonely work.

It paid off. Covington has had a strong spring.

"You can never be satisfied," he said. "You can always get better."

Drawings are nice, but what really matters is the money. UCLA has $40 million in cash and pledges for the $50-million facility, which will be built at Spaulding Field. A UCLA official said he could not say how much actual cash has been raised.

Under the terms of Coach Jim Mora's new contract agreement, UCLA officials must begin construction on the football building by Oct. 1, 2015, or he will not be required to pay a buyout should he take another job.