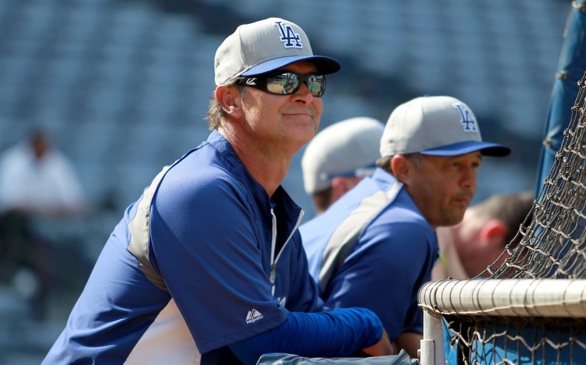 The Dodgers’ defensive mistakes worried Don Mattingly enough that the manager addressed the topic with the team Monday prior to their series against the Philadelphia Phillies.

Then the Dodgers committed three errors in the first two games of the series, including a dropped fly ball in the 10th inning Tuesday that spelled a 3-2 loss.

For all the expectations surrounding the Dodgers’ $240-million-plus roster — the most expensive in baseball history — Mattingly said he expects defense to make the difference in plenty of close games this season.

“If we’re to get where we want to go, the games we play are not going to be 10-8, 7-6 games,” he said. “They’re going to be 4-2s and 3-1s and those type of games where a mistake costs you runs. Runs don’t come easily. We’ve got an offense capable of scoring, but good pitching stops it.

“That’s why we continually talk about the little things that don’t get the attention that end up costing you a run.”

The manager looked like a prophet later Wednesday, when the Dodgers and Phillies got caught up in another low-scoring affair. A pair of RBIs by Yasiel Puig gave the Dodgers a 3-1 lead, and the Dodgers led 3-2 in the eighth inning at press time before 40,776 at Dodger Stadium.

Left fielder Carl Crawford, who dropped the fly ball in the 10th inning that led to the winning run on Tuesday, wasn’t in the starting lineup Wednesday. Neither was Dee Gordon or Adrian Gonzalez — for the first time all season — as the Dodgers deployed a lineup laden with right-handed hitters against Phillies starter Cole Hamels. The veteran left-hander was making his first start after missing the first three weeks of the season with left biceps tendinitis.

The Dodgers struck first in the bottom of the second inning. Matt Kemp lined a stand-up double into left field and went to third base on a single by Scott Van Slyke. Juan Uribe’s sacrifice fly to right field drove in Kemp, and Hamels retired the Dodgers without incurring further damage.

Philadelphia got the run back in the fourth inning when Jimmy Rollins doubled and Ryan Howard drove him in with an RBI single.

In the fifth inning, the Dodgers staged a two-out rally when Drew Butera singled and pitcher Zack Greinke walked. Puig ripped a single into left field, scoring Butera with the go-ahead run.

That was the last run allowed by Hamels, who allowed six hits and two runs in six innings. He walked one batter and struck out five.

Right-hander Jeff Manship took over in the seventh inning and ran into trouble again with the bottom of the Dodgers’ batting order. Greinke, batting for himself, raised his average to .200 with a double into the left-field corner. That brought up Puig again and he delivered, roping an RBI triple high off the right-field wall.

Greinke reached double-digit strikeouts for the 18th time in his career when he struck out Domonic Brown in the seventh inning.