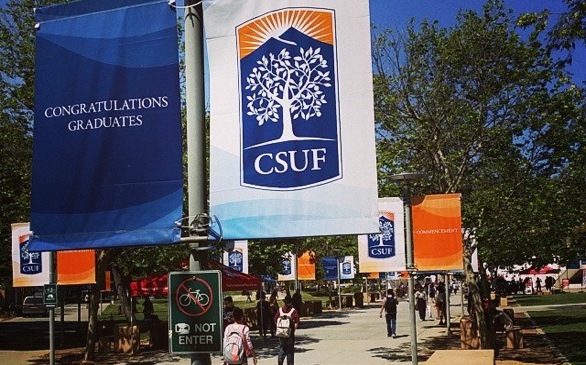 FULLERTON -- Cal State Fullerton opened a resource center for undocumented students on Wednesday, becoming the first in the CSU system to create a specific space with programs and services for students who for the most part either grew up unaware of their immigration status or were told to hide it.

The Titan Dreamers Resource Center is designed to provide academic and emotional support, improve retention and graduation rates, offer referrals to financial assistance and provide a comforting environment where students from undocumented families can connect with each other.

"If we think about it, this country was founded by immigrants," Cal State Fullerton President Mildred García told administrators, teachers and students gathered for the center's grand opening.

At least two other California universities have similar centers.

Cal State Fullerton students said the new center will help provide them with guidance and a place to connect with others.

"I never disclosed to anyone except my track cross country coach that I was undocumented. You never knew who to trust. You kept your identity hidden," said Ana Celis-Luna, a graduating senior involved in the center's creation.

"College is when you find yourself. And having to hide a part of yourself doesn't allow you to grow," said Celis-Luna, adding that the resources and support would have been helpful at Cal State Fullerton and her first couple of years at Riverside Community College.

"The fact that Cal State Fullerton is giving us a resource center says: 'We're here for you. We accept you. We want you to graduate.' That's the biggest statement a university can make," said Celis-Luna, who now has temporary deferral from deportation under an Obama administration program for people brought to the country at a young age and who meet certain requirements.

For Bupendra Ram, a graduating senior also involved in the center's creation, college for the most part was a lonely experience.

"I was very alone. I didn't have a community on campus that supported my needs. That's what's beautiful about this center. It caters to people who don't have resources," said Ram, who also was accepted under the 2012 Obama administration Deferred Action for Childhood Arrivals program.

College students who were gathered for the opening said they are looking forward to tapping into its resources. Approximately 800 students on campus are believed to be undocumented or have DACA status, officials said.

In Los Angeles, the UCLA Labor Center opened a Dream Resource Center in downtown in 2011 but also offered services prior to its creation, according to Natalia Garcia, a project coordinator. The center offers internships and scholarships, conducts studies on the experiences of immigrant youths and offers other resources and services.

UC Berkeley opened the Haas Dreamers Resource Center in 2012 as part of an Undocumented Student Program, Director Meng So said. Undocumented students are eligible for free legal support, emergency grants for housing and other expenses, book vouchers to buy textbooks and other services, So said.

At UC Berkeley, about 300 of the approximate 30,000 students are undocumented, So said. Asked why the university is allocating special resources to the group, he said: "It's a question of equity. Once you admit students to the university, it's the responsibility of the university to fully support them.

"We're telling them: 'We believe in you.' It's not a sink or swim mentality," he said, adding that the students and their families are taxpayers as well and deserving of the services.

For about three decades, Cal State Fullerton has had an informal network of faculty, staff and administrators working to help students living in the country illegally, said Carmen Curiel, interim director for a new department: Diversity Initiatives & Resource Centers.