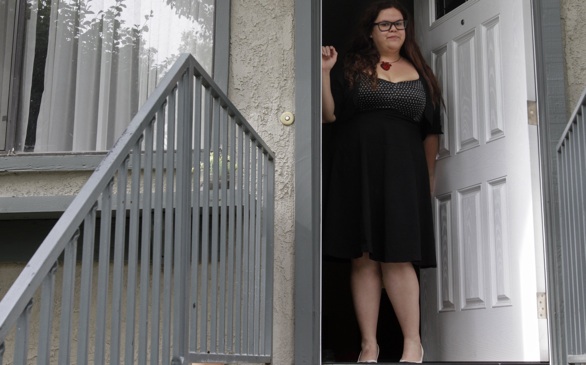 Sarah Luna wants to buy a home in up-and-coming northeast Los Angeles before it’s too late.

At 31, she has a master’s degree and earns more than $70,000 as a court reporter and freelance editor. She daydreams about trading the Glendale, Calif., apartment she shares for a little condo, maybe in Echo Park or Highland Park.

Just one thing holds her back: The $700 she’s paid every month since 2008, after she graduated from the University of Southern California — with $75,000 in student debt. With about half that total left to pay, buying that condo seems a long way off.

“Honestly, I don’t know if it’ll ever happen,” she said. “Barring some sort of awesome miracle, a down payment is hard to wrap my head around right now.”

Of the many factors holding back young home buyers — rising prices, tougher lending standards, a still-shaky job market — none looms larger than the recent explosion of college debt.

The amount owed on student loans has tripled in a decade, to nearly $1.1 trillion, according to the Federal Reserve Bank of New York. People in their 20s and 30s — often the best-educated and highest-earning among them — owe most of that tab. That is keeping a crucial segment of home buyers on the sidelines, deferring one of the traditional markers of adult success.

The National Association of Realtors recently identified student debt as a key factor in soft demand for home-buying this spring. A recent study by the trade group identified student loans as the top reason many home buyers delayed their purchase. Many more didn’t buy at all.

Surveys show today’s adults value homeownership just as much as their parents did. But the shaky job market, higher debt loads, and the roller-coaster market of recent years is keeping many from pulling the trigger, said Selma Hepp, senior economist with the California Association of Realtors.

“They’re just postponing,” she said. “It’s the economy and the recession and what that generation has gone through.”

The share of buyers who are first-timers has dropped well below historical averages — 28 percent of California buyers last year, compared with 38 percent typically, according to CAR surveys. The absence of a new generation of customers could become a long-term problem for the industry, said Dustin Hobbs, spokesman for the California Mortgage Bankers Association.

“You have to have that swath of first-time buyers who will eventually be your move-up buyers,” he said. “When you take that out, it damages the whole chain.”

It’s a sign that skilled, educated workers are getting pushed out of the housing market.

“When people have less money to commit to housing, they don’t buy a house,” Hobbs said.

Jay Stewart Samilin sees that all the time. He’s an agent at Rodeo Realty in Beverly Hills, Calif., and runs a tax preparation business on the side. Many of his younger clients are skipping the house until they pay down their debt.

“They’re maxed out on student loans, and there’s nothing else they want to think about until they pay that down,” he said.

Some who do start shopping quickly realize they can’t afford as much house as their income suggests. The more they pay each month on student loans, the less the bank will lend them to buy a house, said Natalie Lohrenz, director of counseling at Consumer Credit Counseling Services of Orange County, Calif. In a pricey market such as Southern California, that can severely limit a buyer’s options.

“You have to think about your quality of life after you purchase this home,” she said. “It’s OK to rent for a while.”

That’s not to say some people don’t make it work.

Marco Manansala is starting to shop for a house, maybe a two-bedroom in Long Beach, Calif., or on Los Angeles’ Eastside, close to a freeway. When he began to think about it, the 28-year-old got preapproved for a loan — but only for $180,000.

So he started aggressively paying off his car, and he’s worked his student loan balance down to $6,000, from $10,000. With a good job as a creative director for a Venice marketing agency, he has cut his spending to save up for a down payment. He’s getting close.

“I have a goal of buying something by June,” Manansala said. “I’m gearing up for it.”

But many others, like Luna, are forced to take a much longer view.

She graduated into the worst job market in decades. Although she eventually found work that enabled her to keep up with loan payments, it’s been hard to save much. In six years, she’s paid down nearly half of her original tab. When she borrowed the money for a master’s in professional writing, Luna acknowledges, she was an “idealistic” 22-year-old, and the numbers didn’t seem real.

Now the reality of a $700-a-month student loan payment makes it hard to get ahead, house or no house, even with a good salary. And she’s worried she’ll get priced out of the city she loves.

“It’s frustrating,” she said. “I think by the time I get a chance to get together that money and find a house, it’ll be unattainable.”