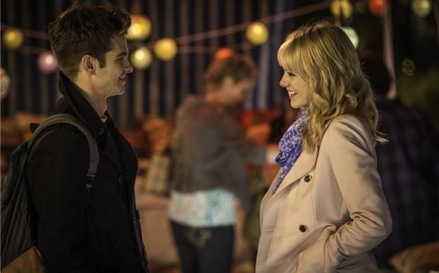 LOSS ANGELES — Andrew Garfield, the star of The Amazing Spider-Man 2, took one glance around the Bel-Air eatery and made a quick assessment:

“Peter Parker wouldn’t be allowed in here,” the 30-year-old said with a nod.

It is nearly impossible to picture the brainy, blue-collar kid from Forest Hills, Queens, enjoying fine California cuisine on an upscale restaurant patio on an April afternoon, and even Garfield, the 30-year-old actor who has lived inside Peter Parker’s skin for the last few years, seems a little too low-key and comfortably unkempt to belong to the class of diners soaking up the mild sunshine.

But Peter’s outsider quality and the transformational aspect of his accidental encounter with a scientifically enhanced arachnid was one thing that so deeply appealed to Garfield long before he ever starred in a blockbuster or had even settled on an acting career. The self-described skinny kid in England who was bullied by his classmates found solace — and hope — in the webslinger.

“I needed a myth,” Garfield said of his attraction to the crafty costumed hero created by Stan Lee and Steve Ditko at Marvel Comics in 1962. “I needed a story to put myself into to understand where I was at, to remind me that it’s OK to be imperfect. ... You can be imperfect and still be a hero. That’s incredibly empowering for young people.”

In the new $200-million production — directed like its predecessor by Marc Webb — Garfield’s wall-crawling hero is beset by numerous threats, chief among them Jamie Foxx’s Electro, an incandescent blue bad guy who wields the ability to control the power grid.

Yet even as he must try to contain the damage Electro inflicts across Manhattan, Peter Parker struggles to learn more about his own past, including his father’s demise. He’s also wrestling with his relationship with Gwen Stacy (Emma Stone), attempting to balance his feelings for her with his desire to keep her out of harm’s way. Plus there’s the matter of an old friend, Harry Osborn (Dane DeHaan), whose reappearance spells trouble.

It’s the kind of conflicted, complicated character that appeals to the actor.

Born in Los Angeles but raised in London, Garfield attended the Royal Central School of Speech and Drama and found work on stage before winning smaller turns on English TV (he even showed up on the cult series “Doctor Who”). He began to build a reputation as a serious, emerging talent with his performance as crime reporter Eddie Dunford in the “Red Riding” miniseries, a moody saga comprising three overlapping violent tales.

Soon after, he was approached with an opportunity to audition for the studio’s Spider-Man reboot — a project that initially generated controversy following so closely after 2007’s Spider-Man 3, the film that brought director Sam Raimi’s earlier blockbuster trilogy about the character to a close. To book the audition, Garfield said he was required to sign a contract stating that he would accept the part if it were offered to him without first being allowed to read the script.

“I was like, ‘This is ridiculous,’” he recalled. “I don’t even know that I’m going to get on with the people. They were like, ‘This is the way it is with these movies. The studio has the power. So either you sign up now or they don’t audition you.’ The 3-year-old inside me is going, ‘You’re hesitating?’”

The actor said he developed a rapport with Webb, who came to the movie as the director of the indie breakout (500) Days of Summer, but the creative team struggled to bring something surprising to a retelling of Spider-Man’s well-known origins, which were recounted once more in the script for the 2012 film credited to James Vanderbilt, Alvin Sargent and Steve Kloves.

“The fresh stuff in that film was invented on the day,” Garfield said. “We were given a structure, but there had to be a lot of invention going on to give it life. I felt like there were lots of missed opportunities. It was heartbreaking in a lot of ways. I didn’t sleep.”

The Amazing Spider-Man turned out to be a blockbuster hit that took in upward of $262 million at the domestic box office and also earned critical praise, thanks in part to the winning chemistry between Garfield and Stone, who met and began dating during the production.

“Emma and Andrew, the spontaneity of their interaction is what I think everybody reacts to, and how connected they are,” Webb said. “They’re not just reading lines. You’re watching people have fun, and that doesn’t always happen. They have extraordinary chemistry.”

Garfield described Stone in glowing terms, calling her “a perfect scene partner,” someone who is “open and present and flowing like a body of water.” But he was reluctant to share details about their off-screen lives.

“There is this assumption now that if you’re an actor you’re asking to be famous and you’re asking to be a celebrity and to have your private life spread in whatever publication or online,” Garfield said. “I have to keep reminding myself that I don’t have to please people by talking about something that is no one else’s business.”

With the exception of the Spider-Man movies, Garfield seems to prefer projects that title toward the prestigious — he recently shot the indie drama 99 Homes with award-winning filmmaker Ramin Bahrani, and he’s poised to play a 17th century Jesuit priest for director Martin Scorsese in the film Silence. On stage, he won acclaim (including a Tony Award nomination) for his Broadway run playing Biff Loman in “Death of a Salesman” opposite Philip Seymour Hoffman for director Mike Nichols in 2012.

His adventures in comic book cinema aside, it would be difficult to accuse Garfield of courting fame. In person, he’s thoughtful and soft-spoken and refers often to “the energy” of a person or a place, displaying much of the low-decibel charm he brings to his scruffy, sarcastic Peter Parker. He makes his home in the same city as his screen alter ego too, where he said it’s easier to avoid becoming caught up in Hollywood politics.

“New York City, you know that no one (cares) about who you are — that’s healthy. Here, people really care,” said Garfield, between bites of a lobster Cobb salad. “I do just want to create things and be an artist and explore and experiment and be free of fear of judgment. That’s the big joke. The religion of celebrity and fame, the fanaticism of the star, it’s not real in any way. It’s all illusion.

“L.A.’s dangerous for actors. I think there’s a collective unconscious thing happening where there’s value placed on things that have no value, on what a film makes at the box office — that being a mark of success as opposed to the journey of creating the thing.”

In the case of The Amazing Spider-Man 2, that journey was far less fraught this time around. The film shot in New York for the first half of 2013, working from a script by Alex Kurtzman, Roberto Orci and Jeff Pinkner that looked back to comics lore, including a famous Gerry Conway 1973 story line that involved the demise of a key character.

Webb said he disliked the idea of the sequel being known as a darker film, and Garfield said he sought to bring a joyous spirit to even the most difficult scenes.

“I think me and Marc were both like, ‘What is Spider-Man to us?’” Garfield said. “Spider-Man is the trickster, the neurotic, talk-too-much giddy teenage boy that’s really a bent arrow, the rebel. I wanted somehow to try to have fun in every scene even if the situation was awful.”

The approach seems to be paying off. Early reviews have been largely positive in the wake of the film’s early international opening in mid-April — the Guardian’s Xan Brooks described the film as “savvy, punchy and dashing,” praising Garfield for his “whelpish and raw” take on Peter.

Industry tracking suggests that The Amazing Spider-Man 2 could take in more than $100 million in its North American debut, which must come as good news to Sony given the studio’s plans to expand the comic book franchise beyond just the future Spider-Man sequels set to open in 2016 and 2018. New movies about Spidey’s nemesis Venom and the collective of villains known as the Sinister Six are also in the works.

Garfield said he’s not entirely certain where he might want to take Peter Parker, but the boyish leading man isn’t too worried about outgrowing the character, despite playing someone so many years his junior.

“I got a lot to figure out still,” Garfield said. “It’s never done.”