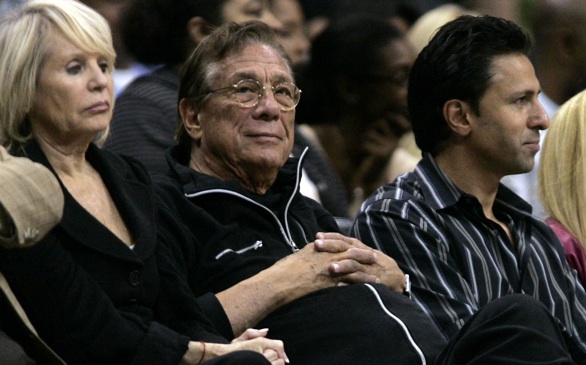 Clippers owner Donald T. Sterling, in a 2008 file image, is being investigated by the NBA.
(Credit: Alex Gallardo/Los Angeles Times/MCT)

OAKLAND — Sacramento Mayor Kevin Johnson said Sunday the National Basketball Players Assn. wants the NBA to bar Clippers owner Donald Sterling from playoff games the rest of this season and impose the maximum penalty allowed under league bylaws if racist remarks purportedly made by Sterling can be verified as his.

Johnson, who is assisting the players union in its response to the controversy surrounding Sterling, said the players have asked for the punishment to be levied before the Clippers host the Golden State Warriors in Game 5 of their first-round playoff series Tuesday at Staples Center.

"This situation is a massive distraction for the players and the league right now," Johnson said during halftime of the Clippers' 118-97 loss in Game 4 at Oracle Arena. "It must be addressed immediately and we have to put this great game back on track so we can talk about the playoffs going forward."

National outrage arose after TMZ released an audio recording featuring the voice of a man who sounds like Sterling telling a female friend that he was upset she posted a picture on her Instagram account of herself next to Lakers legend Magic Johnson because he didn't want her to be associated with black people.

Possible sanctions are believed to include a hefty fine or suspension, though a mandate for Sterling to sell the team is considered unlikely in part because it could trigger a vicious legal battle.

Kevin Johnson said the players union has asked NBA Commissioner Adam Silver to bar Sterling from attending playoff games for the duration of the postseason. Sterling did not attend Game 4 after sitting courtside for the first three games of the series.

Johnson said the union also wants the league to make a full accounting of Sterling's alleged past racial indiscretions and explain why he was not previously punished; explain the range of possible sanctions permitted under NBA bylaws; and make the union "full partners in this process moving forward."

Sterling agreed to pay $2.73 million in 2009 to settle allegations by the government that he refused to rent apartments to Hispanics, blacks and families with children in the Koreatown area of Los Angeles and was accused of making salacious comments regarding minorities in numerous depositions.

Johnson, a former three-time All-Star point guard for the Phoenix Suns, said he agreed to assist the players union at the behest of Clippers point guard Chris Paul, the union president. Johnson, who is also assisting the union with its search for a new executive director, said his involvement with the Sterling matter would allow Paul to focus on the playoffs.

Johnson said he conducted an emergency meeting with the union's executive committee and met Sunday with Silver, who attended Game 4 but did not address the media.

Players are united in their belief that Sterling deserves severe punishment, Johnson said.

"If what has been alleged and is stated is authentic," Johnson said, "then there must be sanctions that make it clear that the NBA family will have zero tolerance for such conduct today, tomorrow or ever."

Golden State Coach Mark Jackson expressed a similar sentiment before the game, calling the remarks allegedly made by Sterling "unfortunate, disappointing and [there's] no place in society for those thoughts or that mentality.

Jackson, who played for the Clippers from 1992-94, said the Sterling ordeal presented an opportunity for change.

"Now it's time for me, for you, for ownership, for players, for the league, for society to step up and start challenging these folks and putting pressure on these folks because like I said, there are people who have lost their lives. It's just sad to believe that people feel this way today. It's unfortunate."

Asked if he could envision himself working for the Clippers if he needed a job, Jackson said, "I cannot right now. Knowing the mentality, I cannot."

Johnson said he expected the Clippers to eventually address the controversial remarks beyond a symbolic pregame protest in which they shed their warmup jackets in unison, revealing red shirts turned inside out to obscure team logos. The team's public relations staffers told reporters after the game that players would take only basketball questions.

"The players are not going to be silent," Johnson said. "That day is coming on."

Sterling's day of reckoning, it seems, could come as soon as Monday.