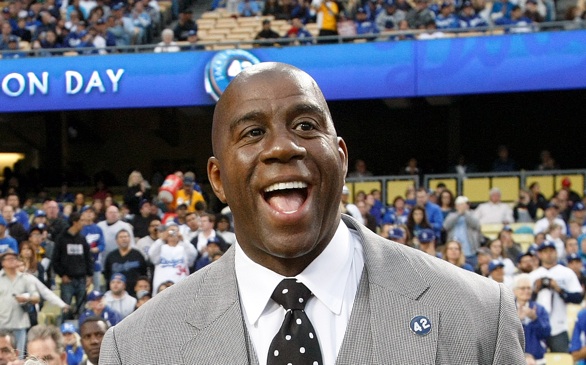 After Donald Sterling reportedly made racist remarks that were caught on audiotape and made public, many people have denounced and condemned the Los Angeles Clippers owner, and are calling for him to retire, step down and/or sell the basketball team.

It is now being reported that Magic Johnson could very well be the new Clippers owner.

Yahoo Sports reports that "league sources" told the outlet Johnson and the Guggenheim Partners want to buy the Clippers, citing that Johnson is "absolutely interested."

Johnson buying the Clippers would be sweetly ironic, given that Sterling actually made racist comments about the former Lakers star in the audiotape. On the tape, you can hear a man (identified by TMZ as Sterling) chastising his girlfriend for taking a photo with Johnson, a black man, and then posting it on her Instagram page.

"It bothers me a lot that you want to broadcast that you're associating with black people," Sterling allegedly said. "Do you have to?"

The voice later says, "You can sleep with [black people)], you can bring them in, you can do whatever you want. The little I ask you is to not promote on that [Instagram] … and not to bring them to my games."

In light of Sterling's remarks, Johnson spoke with the Los Angeles Times and said, "Something has to be done, and if that means him losing the team, then that has to happen. The league has to come down hard and make a statement."

The former Laker also said he "will never set foot again in Staples Center when the Clippers are playing," but obviously that will change if he were to become the franchise's owner...which could indeed happen.

After all, Johnson has proven to be quite the savvy businessman when he bought the Los Angeles Dodgers (with the Guggenheim Partners as the controlling owner) -- who's to say a NBA basketball team is out of his reach?