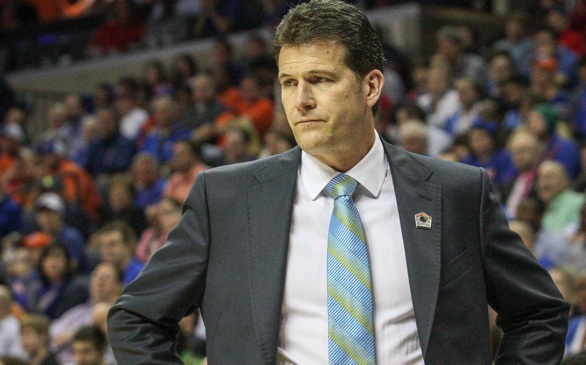 UCLA Coach Steve Alford has a beef with the NBA draft when it comes to college players.

Adams and Anderson had two years of eligibility remaining. Anderson had been expected to leave. Adams announced two weeks that he was going to stay for his junior season, then changed his mind at the last minute.

LaVine had three seasons of eligibility left, but took advantage of a rule allowing players to declare for the NBA draft after one season. It’s the those one-and-done situations that concern Alford.

“Sometimes it’s forgotten that players are coming to college to get a degree,” Alford said after Anderson and LaVine declared for the draft two weeks ago.

“A freshman has only about 25% of his degree completed. They go off to play professional basketball and to assume they will come back and get the degree done five, six, seven years later, I don’t see that happening.”

Alford said “very few players are ready after one year of college.” He would prefer that players be allowed to declare out of high school or be required to play two seasons if they go to college.

“There are very few LeBron James and Kobe Bryants,” Alford said. “Those who are ready should have the opportunity. Staying a second year helps on a lot of different fronts, socially, physically, mentally.”

Alford estimates that after two years of college, most players are “55-60% toward their degree.”

The current NBA rule makes the jump too tempting for some freshmen,  Alford said, citing LaVine.

Alford said he hoped Adam Silver, the new NBA commissioner, would be in favor of a two-year model when the league works out a new collective bargaining agreement with the NBA players association.

But Alford hasn’t always been thrilled with players leaving early, even after three years.

Guard Tony Snell was set to leave Alford’s New Mexico team after his junior season in 2012-13. When Alford found out, he called for a meeting, Sherika Brown, Snell’s mother, told ChicagosSide Sports in January.

“We were having a screaming match, him literally telling me he is not going anywhere, saying ‘What if he doesn’t make it?’ ” Brown said in the interview.

The meeting ended poorly, as Brown said she called Alford an obscenity. The 6-foot-7 Snell declared for the draft and was taken 20th overall by the Chicago Bulls. He averaged 16 minutes a game during the regular season.

Alford jumped as well. He left for UCLA shortly after that meeting.