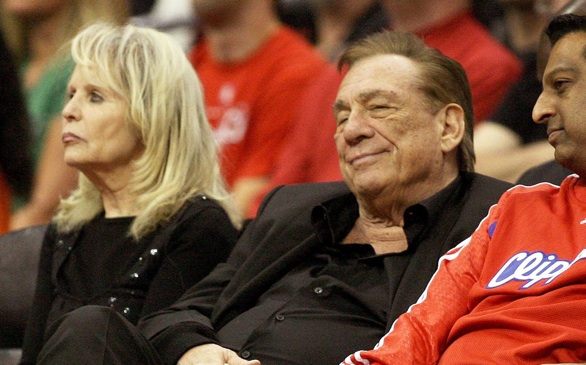 The NBA has come down hard on Los Angeles Clippers' owner Donald Sterling after taking a couple of days to investigate the owner's racist remarks that appeared on two audiotapes made public.

Sterling has been banned from basketball for life and has to pay a $2.5 million fine, said NBA Commissioner Adam Silver during a press conference Tuesday.

"I am banning Mr. Sterling for life from any association with the Clippers organization or the NBA," said Silver.

This means Sterling is not to have contact with the team or the league. He cannot attend any NBA games or practices, and he "is not allowed to inhabit any Clippers facility or participate in any business or player personnel decision involving the team."

Silver said Sterling admitted the voice heard making racist remarks on the two audiotapes (one of which TMZ published on its site) was indeed his. On one of the tapes, Sterling is reprimanding a woman (identified as Sterling's girlfriend, V. Stiviano) for taking photos with black people, including NBA legend Magic Johnson, and posting the photos on Instagram.

"The views expressed by Mr. Sterling are deeply offensive and harmful. That they came from an NBA owner only heightens the damage and my personal outrage," said Silver.

When asked by a reporter if Sterling expressed any remorse regarding his comments, Silver replied, "Mr. Sterling did not express those views directly towards me."

Silver also said he would urge the league's board of governors to make Sterling sell the Clippers. “I fully expect to get the support I need to remove him,” he said.

Monday, it was reported that Johnson is interested in buying the Clippers if Sterling ends up selling the team.

However, there is still the possibility that Sterling might fight this decision. When asked if Sterling would, Silver reportedly said, "I have no idea."