After the Day’s Dramatics, Clippers Turn Back Warriors for 3-2 Series Lead 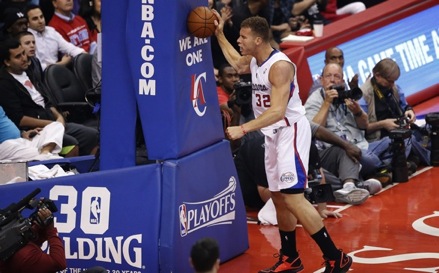 Blake Griffin slams the ball agaist the 'We Are One' logo after making an offensive play.
(Credit: Robert Gauthier/Los Angeles Times/MCT)

LOS ANGELES — You can hear it in Doc Rivers’ voice and you can see it in the wrinkles on his face and the bloodshot corners of his eyes – the past four nights have come without much sleep.

Before Game 5 on Tuesday night at Staples Center, he admitted he was exhausted.

“I am,” he said, briefly showing some vulnerability. “But, I’m not drained enough to not go out and coach this game.”

Adam Silver’s decision earlier in the day to ban owner Donald Sterling for life and recommend he be forced to sell the team provided the players with freedom and enough closure to refocus on basketball, and the Clippers responded, grinding their way through a 113-103 win for a 3-2 series lead.

Lost in all the talk of racism, protests and punishments, the Clippers found themselves playing a huge basketball game.

The loss in Game 4 meant the Clippers needed a win Tuesday or they’d be forced to win a closeout game in one of the league’s most hostile environments.

DeAndre Jordan, a non-factor in Game 4, starred Tuesday, playing with intensity on both ends of the court.

Jordan tied a career-high with 25 points and grabbed 18 rebounds to lead the Clippers in both categories.

The weight that had been on the players’ shoulders might have been lifted by commissioner Silver’s announcement earlier in the day, but Rivers wasn’t in a rush to tell them.

The announcement came with the Clippers on the practice floor, going through preparation for Tuesday night’s game.

Rivers eventually delivered the news in the team’s film room, stopping the tape to tell his team the news.

“There was nothing in the room at the time I said it. It was complete silence,” Rivers said.

“I said what I thought I needed to tell them, and then we went right back to film.”

Rivers had searched for the right thing to tell his players since they first became aware of the tape’s existence.

In the build-up to Sunday’s loss, he thought he failed.

Tuesday, he chose to keep most of the message private, sharing only that he told his players how he admired the way they handled the past few trying days.

Then, he told them to get back to work.

Jordan, the only Clippers player to react on social media in the immediate aftermath of the Sterling audio, had the worst game of his season Sunday, playing 25 invisible minutes.

Tuesday, though, it was the opposite.

And while he eventually broke out to carry the Clippers with 10 points in the third quarter, Blake Griffin struggled to solve the Warrior defense.

Griffin made only two shots in 10 tries in the first three quarters before foul trouble sent him to the bench.

But in the fourth with Paul getting rest, Griffin hit three straight, including a turnaround, one-footed fadeaway to put his team up nine.

The Warriors clawed back and tried to intentionally foul their way back into the game, but Jordan thwarted the strategy, hitting 4 of 6 from the line in the fourth.

The message to his players after the victory probably won’t change much from the win he delivered in the film room earlier Tuesday.

Rivers likely will be proud, but there’ll be the same reminder.

There’s still work to do. It’s something Rivers thought about a lot since Friday night, leaning on the principles his deceased father, Grady, had taught him.

“He would’ve told me to go do my job,” he said with emotion in his voice, “and don’t let anyone stop you from doing your job because of what they think about you.”

Then, you can rest.

The in-game experience was slightly different than normal.

Because so many advertisers either dropped or suspended their relationship with the Clippers, there were no in-game promotions.

Some advertisements were covered up, while others were taken down. …

Reserve forward Hedo Turkoglu had to be helped off the court after a scary fall in the third quarter. Turkoglu, trying to defend David Lee, drew an offensive foul but landed on his back. His injury was called a lower back contusion and he didn’t return. …

After a coordinated pregame display of protest in Oakland Sunday, the Clippers wore only black socks, ditching the inside-out warm-up T-shirts. …

The Clippers reached media capacity, issuing around 300 credentials before being force to cap it. In part due to the interest, the NBA agreed to close both locker rooms from the media pregame. ...

Numerous Clippers staff members dressed in all black as a sign of unity.