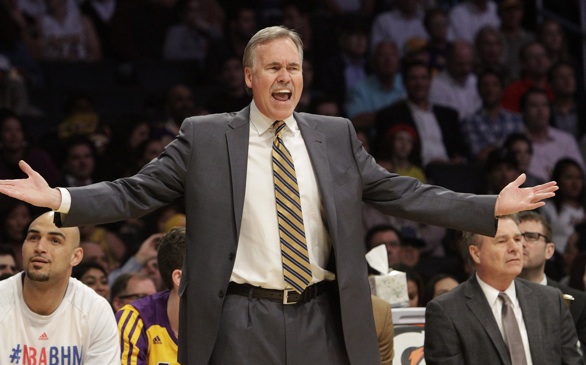 After Mike D’Antoni presided over a Lakers team that finished with the worst record in L.A. franchise history, the team still decided not to fire him.

Instead, they allowed D’Antoni to resign. His agent, Warren Legarie, said D’Antoni reached an “insurmountable impasse” after the Lakers refused to assure him they would exercise his team option so he would finish out the two years on his contract.

The Lakers said in a statement that “the search for a replacement will begin immediately.” Yet a source familiar with the team’s thought process would be surprised if the Lakers hire a coach before the NBA draft lottery on May 20 in New York City, where former Lakers forward James Worthy will serve as their representative.

The Lakers have an open mind toward pursuing someone who will be their fourth head coach in five years, with the options ranging from a high-profile, high-salaried NBA coach to relatively unknown, low-priced candidates.

Bryant and Gasol disliked D’Antoni’s fast-paced system both out of concern for their aging bodies and stemming from their experience winning two NBA championships together under Phil Jackson’s triangle system.

“It wasn’t much of a reaction,” a source close to Bryant said about the Lakers’ star handling the news. “He doesn’t show stuff. It’s hard to get a read on him.”

D’Antoni had a number of supporters, including Nash and a various assemblage of role players, partly because they enjoyed heightened roles under him.

In phone interviews with this newspaper, both Jordan Farmar and Ryan Kelly offered support for D’Antoni.

“It was unfortunate,” Farmar said. “He wasn’t able to get a fair chance”

That is why the Lakers had been leaning toward retaining D’Antoni since March.

The Lakers were mindful their 27-55 record, sixth-worst in the NBA, which in large part stemmed from the players missing a combined 319 games because of injuries, most notably to Bryant (torn left Achilles tendon) and Nash (nerve root irritation in back). The Lakers also assembled their roster featuring a barrage of players — many of whom either lacked success or prominent roles elsewhere — on one-year deals.

Yet, D’Antoni remained largely unpopular with the Lakers’ fan base after he was chosen over Jackson to replace Mike Brown five games into the 2012-13 season. D’Antoni’s 67-87 record (.435) through two seasons entailed countless injuries, mixed support for his fast-paced system and subpar defensive performances.

“Given the circumstances, I don’t know that anybody could have done a better job than Mike did the past two seasons,” Lakers general manager Mitch Kupchak said in a statement. “On behalf of the Lakers, we thank Mike for the work ethic, professionalism and positive attitude that he brought to the team every day. We wish him the best of luck.”