The Class of '98: Share Life Lessons on Touch This and Die 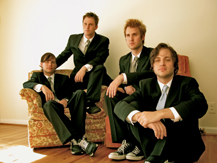 Untitled Document A whole bunch of stuff happened in 1998. The Denver Broncos beat the Green Bay Packers in Super Bowl XXXII, Bill Clinton hooked up with some interns and Bruce Willis and Ben Affleck saved the planet from an asteroid. 1998 was not, however, the year when Steve Wilson, Nick Baumhardt, Ben Harmes or Colby Pitts of the Class of 98 graduated high school.

In Wilson’s case, it wasn’t about school lessons, it was about life lessons.

"It was less we‚ and more Steve," Harmes says of the theory behind the band’s name. "1998 was a big year for him to decide that music was his life and that’s what he wanted to do ... as we all joined in with him, we kinda joined into that vision."

Singer Wilson had been writing songs for years, but the Class of 98 didn’t shape up until two years ago. Wilson and Pitts tinkered with songs together and eventually bassist Harmes, an acquaintance of Pitts, was brought in. The trio experimented with its sound and eventually asked guitarist Baumhardt to move from the Windy City to Music City, USA.

Instead of playing a ton of shows in its hometown, the Class of 1998 made rounds throughout the South in states like Atlanta, Alabama and Kentucky, but it wasn’t the relentless touring that spread the band’s name around. These boys garnered fans the new school way – through MySpace.

"It’s amazing. If we were a band 10 years ago there’s no way we could have done some of the stuff we’ve done so far without the Web ... I don’t think we’re a band that will get a lot of radio play at first. So when kids download a track, the hope is that they’re not downloading the whole record and that there’s still reason to see us play or buy a t-shirt," Wilson says.

He adds later, "We’ve got to realize that people want to hear it and there’s some value in that. I just hope that kids understand that’s the reason bands continue to be bands. At some point, we have to pay the bills too."

Lucky for the band, the time to jump is now and everything seems to be working in its favor. Power pop and pop punk are at an insane level of popularity as indie rock bands have started to takeover radio and Total Request Live.

Although the guys cite bands like Black Flag, NOFX, Blink 182 and the Beatles as major influences they describe themselves as a marriage of two of today’s most popular pop punk bands – All American Rejects and Jimmy Eat World.

"[Jimmy Eat World] is as close to perfection as you can get," Harmes says. "... Clarity. It’s not only the best Jimmy Eat World record, it’s the best rock record ever made," Wilson chimes in.

And while the band may never hear the same compliment about it’s debut Touch This and Die!, the Class of 98 is certainly striving toward impacting the music scene and spreading its music to as many people as possible.

"We want to write songs that kids will love and will want to hear," Harmes says. "We believe that the best way to get our music out to people is by building from the ground up ... I think music is much more meaningful when there’s some honest-to-goodness hard work put into it."

The hard work he speaks of is evident throughout the band’s first full-length. Songs like "New Year’s Resolution" and "Christy’s Wedding" layer solid pop melodies on Wilson’s soothing lyrics that are mainly about starting over and relationships.

With the album in the bag and a spring/summer tour planned, the Class of 98 is anxious to get out there, but they’re also looking optimistically far into the future as well.

"As a band, I think that we are still discovering our sound and where we’re headed," Wilson says. "These songs for us are a year old even though they’re new to the public ... we’re already excited about writing new songs and the future. I’m just so excited to see this all unfold."

Touch This and Die is currently available. For more information, visit www.theclassof98.com.
Article posted on 2/13/2006
This article has been viewed 3231 times.