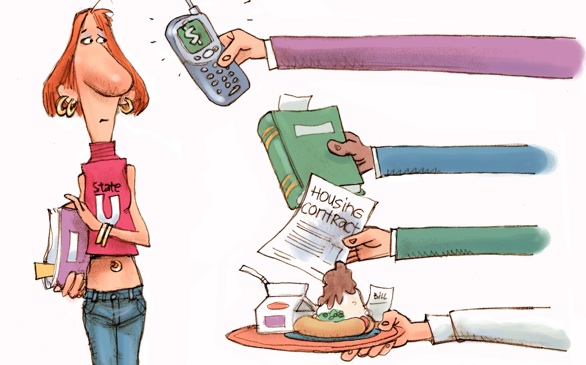 With a college degrees comes many, many bills and other costs.
(Credit: Chris Ware/Lexington Herald-Leader 2003/MCT)

According to a report released on March 24, 2014 by the Campaign for College Opportunity, the number of California undergraduates who take out loans to pay for college has soared 75 percent in the past decade.

It’s true. The rising tuition, exorbitant campus housing payments, textbook fees and other costs, such as health insurance and transportation, make it more and more difficult for students to afford college.

Therefore, it is worth noting some viable ways students can reduce their college expenses.

Tuition – Take Summer Classes
In California, college tuition has increased in a steady upward trajectory over the past few decades. One of the good ways to reduce tuition costs is to take summer sessions.

Staff or graduate students teach some summer courses, so it makes sense if some students worry about the education quality during the summer session.

But Annie Wang, a second-year psychology major student at UCLA, actually considers it as an advantage. “Although some of my psychology classes are taught by graduate students during the summer, I actually enjoy their teaching because they are more accessible than professors, and I can make good friends with them,” she said. “I get more help not only during their classes but also in the following years.”

Housing – Live Off Campus
Although living on campus is convenient, housing and dining costs are very high. The solution: off-campus living.

Living off campus in a community nearby is a good option for those who want to save money without missing opportunities to get involved in campus life.

Mandy Xia, a math major student at UCLA, lives in a two-bedroom, two-bathroom apartment in Westwood with three other girls. According to her, two of them share a room, and their apartment has much more space than a dorm.

In addition, some of the apartments in Westwood are even closer to instruction buildings at UCLA than the dorms. I lived in Hedrick, the farthest dorm on campus at UCLA, when I was a freshman. It took me 25 minutes every day to walk to my classrooms. After I moved into a house with a bunch of girls on Hilgard in Westwood, it now takes me only five minutes.

Remember that living in an apartment also means you have to cook for yourself and deal with trivial things by yourself, like cleaning the bathroom and maintaining a neat kitchen. Still, consider living off campus from another perspective: it’s a good way to become independent and quickly grow up.

Textbooks – Use Other Resources
Textbook prices are sometimes outrageous, especially at an on-campus bookstore.

For example, the required Fund Accounting Principles textbook for UCLA’s Management 1A and 1B classes costs $195.50 at the campus bookstore. For most college students, a textbook like this will only be used once, so it’s not necessary for college students to buy each required textbook.

Obviously, reducing the textbook costs is another way to reduce overall college costs. Besides buying and renting textbooks on Amazon, Chegg or other websites, trading textbooks within your network or borrowing textbooks from a library are also good ways to save money.

UCLA has many textbooks available temporarily shelved at College Library Circulation Desk for a two-hour reserve. Although students can only use the textbooks for two hours at a time, they can check out as many times as they want.