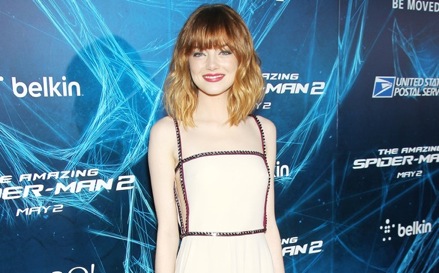 Emma Stone is Hollywood’s sweetheart. She is just that down-to-earth girl everyone would love to hang out with (Andrew Garfield is a lucky guy!).

For the release of The Amazing Spider-Man 2, which she and Garfield star in, Stone did a lot of press appearances, interviews and promotions.

We have gathered the actress' top four moments during The Amazing Spider-Man 2 (which is now in theaters!) press tour:

1. Lip Sync Battle on "Jimmy Fallon"
Put Jimmy Fallon in a room with Emma Stone, and there will definitely be laughs. The two partook in a lip sync battle recently on Fallon's show. For the first round, Fallon sung Iggy Azalea’s "Fancy," while Stone mouthed the words to "Hook" by Blues Traveler. Since the stakes were up to an all-time high, Fallon then decided to go for "Mr. Roboto" by Styx, and Stone rapped to DJ Kahled’s "All I Do Is Win." The song selections were hilarious, and Stone’s rapping to Ludacris definitely solidified her as the winner.

Check it out in the video above!

2. Girl Power!
When Emma Stone called out Garfield for a somewhat sexist comment that he made, feminists everywhere surely fell in love with her. When they were answering audience questions, Garfield said that sewing was a "feminine" thing to do. Stone interrupted him and asked how that was feminine. The question made Garfield backtrack and re-state his comment more appropriately. Good job, Emma!

3. Crazy for Some Spice
In one interview, Stone admitted to having a slight obsession with the Spice Girls. She turned into a complete fan when she had the chance to speak to none other than Sporty Spice! Her reaction to it all just makes you realize that even celebrities have "fan moments."

4. Fearless in Love
For years now, Garfield and Stone have been secretive about their relationship, and Stone has not said the “L” word in public until recently. Her admission to loving her longtime boyfriend came when she was on "Good Morning America" on April 30 -- it was extremely adorable!