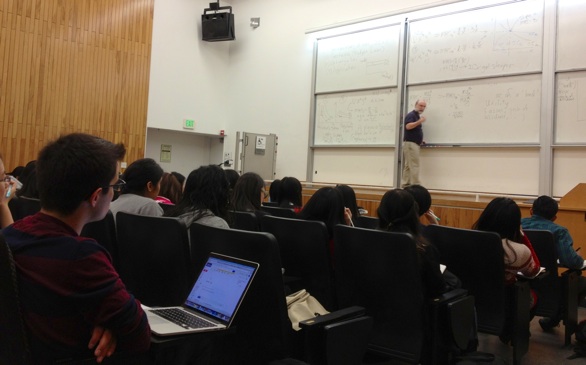 Despite three unsuccessful previous efforts, UCLA officials again are proposing that most undergraduates take a class in racial, cultural, gender or religious diversity.

Most UC campuses and many other universities have such a requirement. But UCLA's largest faculty group, which has authority over curriculum changes, has repeatedly rejected the idea, most recently in a low-turnout vote in 2012.

Now, UCLA Chancellor Gene Block is trying again for what he said is an important academic goal.

"We owe it to our students," Block said in a recent interview. "Many of our students have wanted this for several years. I think the faculty owes it to the students to pay attention, even though I understand there are intellectual arguments on both sides of the issue."

Although Block said he knows that cultural diversity topics are infused in many classes, he said that "there is value to an explicit class that deals with the multiple cultures in the United States living together and the conflicts."

Past proposals sparked arguments about whether students were overburdened with other requirements, particularly in the sciences, and whether a budget-strapped university could afford extra classes. Additional questions about whether these classes improve ethnic relations and whether they usually skew left politically were also raised at UCLA and other campuses nationwide that had similar debates.

UCLA is an ethnically diverse campus, but the small number of African American undergraduates continues to be an issue. Among the nearly 25,300 U.S undergraduates there, about 39% are Asian American or Pacific Islander, 31% are white, 20% are Latino and 4% are black, according to last fall's statistics.

Discussion about the proposed diversity class is focused at UCLA's College of Letters and Science, which enrolls about 85% of undergraduates. The Arts and Architecture school began such a requirement six years ago, while other divisions such as engineering have not.

Under the 2012 proposal, called "Community and Conflict in the Modern World," students in the Letters and Science college would have had to select one course, lasting one quarter, from an estimated 100 mainly pre-existing courses across many departments. Eligible classes included World Geography, the Holocaust in Film and Literature, Women's Studies and the History of Africa.

The goals included "awareness and understanding" of conflicts about race, ethnicity, gender, age, disability, sexual orientation and religion. But supporters said classes needn't stress those factors and could study, for example, how transportation and technology affect various communities.

Supporters also said that about 80% of students would not need an extra class since other courses they took fit the bill; in addition, the "Community and Conflict" class would fulfill one of the 10 general education course requirements, not add one.

But the College of Letters and Science faculty, in a vote that attracted fewer than 30% of eligible voters, rejected the measure 224 to 175. Efforts in 2004 and a decade earlier also failed.

Now faculty leaders are preparing another attempt, perhaps with revisions to include more community internships and more science courses, according to Jan Reiff, a UCLA history and statistics professor who is chair of the campus-wide faculty Academic Senate. She said she hopes it will be approved for students entering in fall 2015.

"This is a major issue for us," she said.

Reiff said she thinks "the climate may be more favorable now" because of increased student activism and Block's strong support. In addition, she cited the October report by a panel headed by former California Supreme Court Justice Carlos Moreno that urged UCLA to better respond to faculty complaints of bias. Other professors point to a recent UC system survey about campus climate, which found significant shares of minorities reporting some discrimination.

Janay Williams, a student activist who is working to get the class requirement approved, said many of her classmates were "very much disappointed" with the last vote and felt the low turnout was an important factor to reverse next time.

Williams, who is black, said she attended a diverse high school in Riverside but that many students come to UCLA unprepared to live and study among such a mix of ethnicities and religions, and that some minority students feel marginalized.

A required diversity class "helps people to learn about someone different from you, to be able to understand where they are coming from," said Williams, who majors in microbiology, immunology and molecular genetics. She said a course will not ease all tensions, but "it's a step in the right direction."

Criticism remains. UCLA anthropology professor Joseph Manson, who wrote an opposition statement for the 2012 ballot, said many faculty felt the course descriptions were too vague and could have fit so many classes that the requirement seemed unnecessary.

Now, he said he wonders why Block is pushing the matter so soon after its last defeat. "The administration's call for yet another vote will strike some faculty as a sign of disrespect for the principle of shared governance and for the democratic process," Manson said in a recent email. Many faculty will wonder "whether it's appropriate to change the curriculum in the service of non-academic (i.e. political) goals."

The UCLA College Republicans, a student group, said in a statement that it values diversity but considers the new proposal "a guise by university leadership to push an otherwise unwanted and offensive political strategy. We believe there are more effective ways — such as expanding free speech zones on campus — to promote tolerance and understanding among students."

The UCLA debate is being renewed as UC Berkeley is commemorating the 25th anniversary of the adoption of its "American Cultures" requirement, a mandate that all undergraduates take a least one of more than 300 semester classes that explore U.S. diversity.

Some schools took action more recently. UC San Diego in 2011 adopted its "Diversity, Equity, and Inclusion" classes after racially inflammatory incidents the year before, including an off-campus party that mocked Black History Month. In February, Cal State Los Angeles faculty approved a graduation requirement for two diversity-related courses, including at least one focusing on race and ethnicity.

Campus News
‘Adulting’ is hard. UC Berkeley has a class for that
568 views