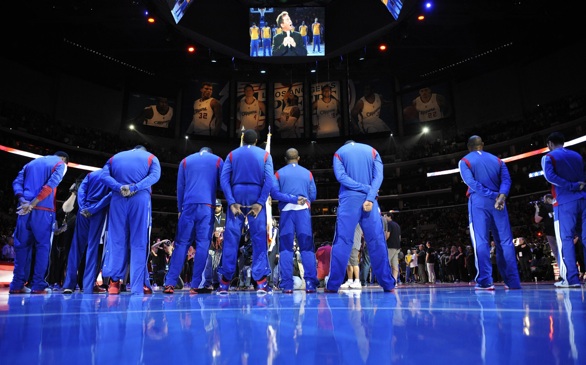 Less than 48 hours after experiencing the euphoric high of winning an emotional Game 7 at Staples Center, the Clippers must gather themselves to play another basketball game.

They will face the Oklahoma City Thunder in Game 1 of the Western Conference semifinals Monday night at Chesapeake Energy Arena.

The Clippers got to the second round by beating their nemeses, the Golden State Warriors, in Game 7 Saturday night.

Having to play again so soon after winning such a draining series will be a challenge, but it beats the alternative — sitting at home.

“You’d rather that option than the other option,” Clippers Coach Doc Rivers said Sunday during a conference call with reporters. “The other option is cleaning out your locker as players and having team exit meetings. So we go through it because we want to. This is what we signed on to do. We’re absolutely where we want to be.

“No matter how we got there and how much adversity it took to get there, we’re here and we’re happy.”

The adversity Rivers referred to — the Donald Sterling situation — still exists. Sterling has been banned for life by the NBA and could be compelled to sell the team because of comments he made about blacks.

Rivers’ players dealt with that issue for several days while trying to play playoff basketball against the Warriors.

“I think that every day that passes it gets easier,” guard J.J. Redick said. “It probably won’t go away as long as we continue to advance. It’s going to be a part of the story.”

The Clippers and Warriors maintained a bitter rivalry this season, and that continued even after Game 7. Rivers confirmed reports that players from his team and the Warriors engaged in a verbal confrontation in a hallway inside Staples Center late Saturday night.

“Besides people talking loud at each other, nothing happened,” Rivers said.

According to several people who witnessed the incident, the arguing began after the Warriors heard what they thought was a Clippers assistant coach yelling that it was quiet in the Golden State locker room. The witnesses were not authorized to speak publicly about the matter.

Golden State players Steve Blake, Stephen Curry and Marresse Speights were yelling at the Clippers’ ball boys, thinking they had made the comments, according to the witnesses. The Clippers’ Matt Barnes, Glen Davis and Chris Paul also participated in the verbal exchange.

Golden State Coach Mark Jackson got involved, and Speights had to be restrained, according to one witness. No punches were thrown, but Clippers team security and the LAPD were called in, according to the witnesses.

“The more I’ve heard, it was much to do about nothing,” Rivers said. “Unfortunately, the way the arena is built, from our training room, that door’s open and their locker room is through that and I guess they could hear guys being excited and so that was about it. From there, I guess there were guys jumping in the hallway in between the two locker rooms.”

Later after Saturday’s game, Rivers had placed scouting reports on the Thunder in each player’s locker.

“We knew that this was going to be one of those quick turnarounds,” Rivers said. “As a coaching staff, we got together after the game and had to do our film work. So this one is not going to be any sleep for any of my staff members.”