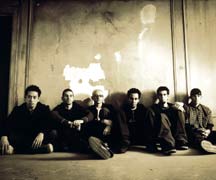 "I’m a multi-genre music lover," says Chester Bennington of Linkin Park, revealing exactly how the Projekt Revolution tour came about. "And every time I’ve gone to see a tour or a show, if it’s a metal band that’s on the bill, then it’ll be all metal bands. If it’s a funk band, then it’ll be all funk bands," continues Bennington. "What we thought would be great would be to put a show together that has all of these things."

"All these things," to Bennington and his Linkin Park band mates, are an eclectic mix of sounds and fans alike for a show that has been described as not just a tour, but a state of mind. It’s no surprise that Linkin Park is the band behind this unique tour — the same band who bravely mixes rock, rap and electronic beats into a genre that’s as original as its six members.

"We wanted to tap acts that we thought were leaders on the cutting edge or breaking ground musically," says LP’s guitarist Brad Delson. This year, Linkin Park headlines with Korn, Snoop Dogg, The Used and Less Than Jake, boasting the biggest lineup of multi-platinum acts since the tour’s 2001 inception.

When talking about his tour mates, Bennington beams like a proud papa. "We’ve got Snoop Dogg who’s just a legend in hip-hop. Just the fact that he brought melody into hip-hop made it easier for us too, in a way, to be able to integrate those melodies into rock music."

Bennington also believes that Korn "helped pioneer heavy music back onto radio." He admits that, "If it wasn’t for Korn, a lot of the songs we’ve written wouldn’t have gotten played on the radio. [Korn] did open the door for us musically — they definitely played a major role in getting our kind of music heard."

Projekt Revolution is the final tour stop for Linkin Park, touring since the March 2003 release of Meteora, whose multitude of hits include "Numb" and "Breaking the Habit." LP’s Mike Shinoda says the band will soon be devoting time to their 2005 release. "It will be awhile before we’re touring again," he admits. "We really want to finish off our touring cycle in a big way."

Another unique aspect of Projekt Revolution is "Revolution Village" — the tour’s traveling entertainment — filled with interactive experiences that fans can enjoy during the daylong show. The SoBe Adrenaline Rush compound will be offering special digital mixing stations where fans can create their own music from Projekt Revolution artists to download onto their computers, while the Major League Baseball road show will allow fans free access to pitching and batting cages. Blockbuster will also be hosting the Game Rush lounge, where fans can kick back and play interactive video games — some will even be lucky enough to score competitions with members of Linkin Park themselves.

Bert McCracken of The Used shares a more personal story about the entertaining antics surrounding Projekt Revolution. "I was out watching Snoop Dogg with Linkin Park and some of the Less Than Jake guys," says McCracken, "and we noticed this dude in the crowd that was kind of booty dancing with this girl. But his pants and his underwear were like down at his ankles.

"He was completely naked. As soon as the security guard started walking over to him, he pulled his pants up as quick as he could," says McCracken with a chuckle. "We all just watched and said, "Wow."

The Used will be debuting "Take It Away" on the tour, the first single off their album In Love And Death, scheduled for release Sept. 28. Beside that, McCracken adds with a smile, "Another crazy thing about this tour is the Heineken tent. They set up a huge tent every day and give everybody free beer all day long." Now how sweet is that?

Meteora is currently available. Linkin Park will be performing with Korn, Snoop Dogg, The Used, Less Than Jake and others for Projekt Revolution, Sept. 4 at the Hyundai Pavilion at Glen Helen in Devore. For more information, visit linkinpark.com.