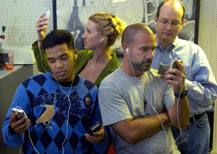 Untitled Document When he left his home in Orlando, Fla., to attend New York University, Dante Lima quickly discovered a terrific use for his iPod.

While walking down the streets of New York, Lima has found that when he wears his iPod headphones – known to iPod aficionados as "ear buds" – he can walk past the throng of sidewalk hucksters without being bothered.

"If you want to get away from them, just start listening to your iPod," says Lima, 20. "They don’t approach people with headphones on."

Wearing headphones has become the modern equivalent of wearing a "Do Not Disturb" sign around one’s neck.

Perhaps that’s no surprise. The MP3 player is only the latest in a number of gadgets – starting with the Sony Walkman, leading to the cell phone and now the iPod – that give people the ability to close off the outside world.

Americans are becoming enchanted with technology. Shoppers chat on their cell phones, stopping only to talk briefly to a cashier. On airline flights, passengers watch movies on laptop computers, answer e-mails on their BlackBerries or watch episodes of "Lost" on their video iPods, rather than chatting with the person in the next seat.

So is tuning out the rest of the world good for us? Could we miss meeting our soul mate because we are too busy listening to our headphones?

"We’re living in a world where technology is a huge part of our lives, but it can be a blessing and a curse," says etiquette expert Jacqueline Whitmore. "Some people think this technology can make us more productive. But it’s not helping us with social skills. It’s alienating us from other people."

But many users of portable MP3 players say the devices help them relieve stress or, particularly at work, concentrate. "It’s healthy to decompress yourself when you live in a chaotic, densely populated world," says Calvin Squires, 32, a recent iPod convert.

\If MP3 players help tune out noisy co-workers, or help them relax while waiting for a doctor’s appointment, then what’s the harm in cocooning inside your own technological bubble?

The danger, says one sociologist, is that we start losing touch with the people in our lives – even if it’s just the cashier – because we won’t get off the phone or take off headphones to exchange pleasantries.

Studies show that these mini-conversations – with the same woman at the coffee shop each morning or the regular banter with the guy who owns the gas station – are important to our psychological well-being.

"If you have a regular routine and you go back to the same places, your day can be filled up with these short contacts with people you see regularly," says Richard Lachmann, sociology professor at the University of Albany. "People who don’t have that are really missing something."

Evidence suggests, says Lachmann, that these little interactions throughout the day help us cope with the stresses of everyday life – and give us a feeling of community that is "as much good as having a bunch of cousins who live nearby."

"If people lose that," Lachmann says, "it’s going to become a big problem."

Still, the fuss about the iPod strikes some as much ado about nothing.

Although he admits that "we go around in a kind of fog of technological insulation," cultural historian Timothy Burke says most Americans already avoid making eye contact on planes, trains and, in particular, elevators.

"Before the iPod, in subways or on buses, people carried books or newspapers. Or they looked at the ground," says Burke, a professor at Swarthmore College.

"In that way, there’s nothing novel about the iPod. It’s just one more way of controlling the social space around you."

Distributed by Knight Ridder/Tribune Information Services.
Article posted on 2/13/2006
This article has been viewed 2442 times.