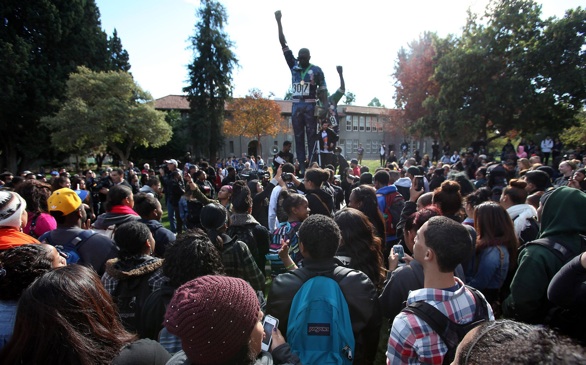 SAN JOSE, Calif. — San Jose State has expelled three of the students charged with the racially tinged bullying of a freshman and extended one other student’s suspension, requiring him to go to counseling and to remain on probation for the rest of his college career if he returns to school.

All four had been suspended pending final disciplinary action for allegedly subjecting then-17-year-old Donald Williams Jr. to repeated abuse, including wrestling him to the ground and fastening a bike lock around his neck, calling him racially derogatory names, locking him in his room and displaying a Confederate flag.

The university’s move comes after news surfaced in November that the freshman reported being tormented relentlessly for weeks. The revelation sparked community outrage, an internal investigation, an apology from the college president, criminal charges and the creation of a task force. All four suspects have pleaded not guilty to misdemeanor battery and hate crime charges.

African-American leaders were pleased to learn Friday that the university had taken stern disciplinary action. The expelled students are banned for life from enrolling in any California State University college, according to university documents and sources familiar with the investigation.

“It’s a no-brainer,” said LaDoris Cordell, a retired judge and city police watchdog who chaired the task force. “They have no business being enrolled at SJSU.”

But a lawyer for one of the three expelled students said college administrators failed to conduct a thorough review of the evidence.

“We were very disappointed with the school’s process,” said lawyer Eric Geffon, who represents a student who was under age 18 and is being prosecuted as a juvenile. “It was clear early on they had already made up their mind.”

A university spokeswoman said the college is prohibited from commenting on disciplinary matters concerning individual students.

In addition to the juvenile, the expelled students are Logan Beaschler and Colin Warren, both 19. The university found they violated six university rules, including jeopardizing Williams’ safety, which may help the Santa Clara County District Attorney’s Office win the case or drive a harder plea bargain. Prosecutor Erin West declined to comment, as did Beaschler’s lawyer. Warren’s attorney did not respond to a request for comment.

The other student, Joseph Bomgardner, 19, was suspended until July 31. He agreed to the suspension and other sanctions without admitting he participated in the conduct. He must complete at least five counseling sessions with an outside therapist and attend a follow-up meeting with school officials in July. If he decides to return to campus, he will remain on permanent probation.

His lawyer, Sam Polverino, noted that Bomgardner’s punishment was significantly lighter than the other three students.

“It is for the balance of the school year, which is substantially different from how the other students were treated by the San Jose State University administration,” Polverino said. “That may give an inkling of the participation or lack of it of my client.”

The Rev. Jethroe Moore II, head of the local chapter of the NAACP, expressed satisfaction with the university’s action but said he doesn’t believe the students deserve any jail time. If they are convicted, the maximum punishment for a misdemeanor hate crime is a year in county jail.

“We understand they are young and just want them to be better human beings, so this becomes a learning experience for them,” Moore said. “If they went to prison, they’d probably come back as skinheads.”

Geffon and others contend the incidents were part of a broader series of pranks that included others in the dorm. Clamping the bike lock around someone’s neck, for instance, was something the young men saw on Comedy Central, Geffon said.

“The first person in the dorm who had a bike lock put around his neck was my client, who is white,” Geffon said. “It wasn’t a racially motivated act.”

Geffon said his client laughed, and the lock was removed. In Williams’ case, according to campus police reports, he was told by the suite mates that they had lost the keys.

The young men may be involved in the hazing to varying degrees, as their lawyers have suggested. But according to campus police reports and emails between housing officials, the incidents included nicknaming the black student “Three-fifths,” a reference to the way the government, for census purposes, once counted blacks as just a fraction of a person. When he protested, they dubbed him “Fraction.”

Williams’ father, who is a theater professor at the University of California, Santa Cruz, and his mother reported their son’s ordeal to campus police via housing officials after they noticed a Confederate flag draped over a cardboard cutout of Elvis Presley in the living room of the suite and a dry-erase board with the “N-word” scrawled on it.