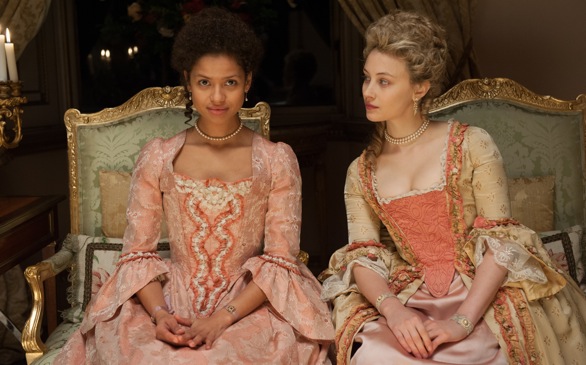 Whether or not the general American population learned about other countries’ histories with slavery while in high school is unknown to me. However, I do know that my little suburban school failed to teach me much about what African slaves dealt with on the other side of the meridian.

This is why it was refreshing to hear about Belle, a film I thought would answer most of my questions about slavery in 18th century England.

Unfortunately, this Amma Asante-directed biopic only answers a few, as it focuses on the inner struggles of only one illegitimate mixed-race daughter of a Royal Navy Admiral. Her name is Dido Elizabeth Belle.

In Belle, which is based on a true story, we see Dido struggle to identify herself as a mixed Black woman born into high society.

She indulges in the privileges her bloodline allows her—nice dresses, a healthy inheritance and a grand house to live in with her white cousin, aunt and aristocratic uncle—but she also deals with her skin color’s consequences.

For example, Dido cannot eat at the family dinner table when there are guests, she is at first not allowed to partake in the traditional “season” when young girls are paraded throughout London in hopes of finding a "suitable" husband, and white English people are either scrutinizing her or watching her with a curious eye constantly.

I walked away with a complete understanding of what a woman in Dido’s situation faced every day, but I have no clue what someone less fortunate than Dido experienced on a day-to-day basis...which was what I was expecting in any movie about slavery.

Sure, the film alludes to the fact that African slaves were thought of as animals and their lives meant nothing. And Belle’s subplot does revolve around the uncle’s opportunity to actually make a positive impact on slavery (which is actually a far better story line than the one that follows Dido’s romance with a poor vicar’s son).

But what would have made this film more powerful is at least a little bit of an English slave’s perspective, so viewers can see what slavery in England was really like. I am not saying the film needed to be 12-Years-a-Slave graphic to make an impact; it simply needed an additional character to show a contrast and provide a little insight.

In short, Belle missed its opportunity to give audiences a thorough and rare look into England’s not-so-pretty past with slavery. Although a film like this has been long awaited (and I am sure many audiences will greatly appreciate it), I would have waited much longer for a film that included more than just one woman’s struggle with identifying and accepting herself.

Belle is currently playing in theaters.