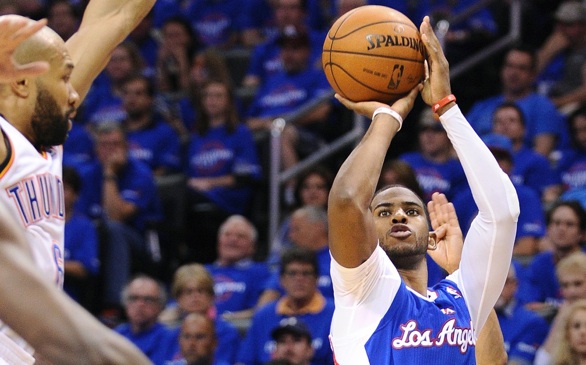 Not Chris Paul and the Los Angeles Clippers.

Exhausted from the dark cloud that enveloped them at every turn?

Not Paul and the Clippers.

Paul orchestrated an impressive show of force Monday night that carried the Clippers to a 122-105 demolition of the Oklahoma City Thunder in Game 1 of a Western Conference second-round playoff series.

His 32 points in only 27 minutes 44 seconds propelled the Clippers to a resounding win in the opener of the best-of-seven series at Chesapeake Energy Arena.

Even more impressive was his shooting. Paul made his first eight three-point attempts and finished eight for nine, and hit 12 for 14 shots overall as the Clippers snatched the home-court advantage away from the Thunder.

Game 2 is Wednesday night here. Then the Clippers return home for Games 3 and 4 Friday night and Sunday afternoon at Staples Center.

Game 1 tipped off less than 48 hours after the Clippers won a hard-fought Game 7 on Saturday night at Staples to clinch their first-round series against Golden State.

“We wanted to set a tone for the series, really,” said Blake Griffin, who had 23 points, five assists and five rebounds. “Obviously the whole goal playing on the road is come in and try take the home court over. We responded. I think mentally we were really strong.

“Just from playing that Game 7, flying here and kind of a quick turnaround. It was for both teams, but I thought we just locked in and took care of business.”

No one was more locked in than Paul. The eight three-pointers were the most he has made in a game in his career.

“Obviously we were still a little tight from traveling,” said Paul, who was three points shy of his playoff career high. “We talked about it. We said, ‘At 8:30 (Monday night), we better be ready to go.’ I came over early before the game and got a lot of shots up. I think that had a lot to do with it too.”

Paul has been dealing with a right hamstring injury and a sprained right thumb, but the injuries clearly didn’t slow him down at all.

“Oh, I was tired,” said Paul, who turns 29 Tuesday. “That was a very emotional game (Saturday), but nobody was going to feel sorry for you tonight.”

Paul started strong, scoring 17 first-quarter points. He missed just one of his seven shots and made all five of his three-point tries.

“He got hot,” Thunder coach Scott Brooks said. “Great players can do that. We’ve got to do a better job of making him feel more pressure.”

But this was all about Paul taking control.

“We needed that,” Clippers coach Doc Rivers said. “We needed a tone setter, because turning around that quickly, I think he felt that he needed to set the tone.”