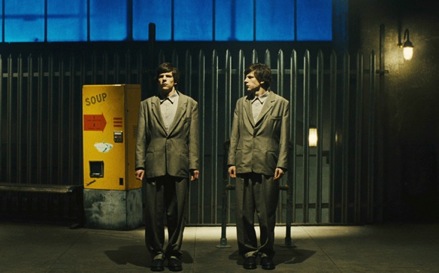 Even though it may strike the chord of envy inside you, at least you have your own identity that they can’t encumber upon.

But, what if that person on the other side of the room, with everything you crave in the palm of their hands, is you?

Riding on the critical success of 2010’s Submarine, writer/director Richard Ayoade brings us The Double, a hyper-stylized depiction of what happens when the mediocre and meek Simon James (Jesse Eisenberg, The Social Network and Now You See Me) realizes someone with his face, his clothes, and bearing the all-too-similar name "James Simon," is stealing his life away. His job, the girl of his dreams and his sanity all become increasingly precarious as James charms his way through Simon’s life.

Based on Fyodor Dostoyevsky’s novel of the same name, The Double is a dark rendition of a classic tale of conflicting inner desires. Whether it’s explicitly about split personalities, (like Dr. Jekyll and Mr. Hyde) or a more conceptual embodiment (like Fight Club), cinema, literature and all mediums in between have ferociously pined at this common premise (also, see this year’s Enemy).

The question is if Ayoade’s take stands out among the rest.

Without question, just like with Submarine, Ayoade fills the screen with scrupulous detail and composition. Unlike Submarine, however, which is lean with neat yet rich visual culture, The Double’s graphic world is a decrepit dysfunctional play of image and sound.

For example, when Simon turns on the faucet, we expect to hear a normal corresponding sound. Instead, Ayoade’s meticulous work with his sound design team explored a breadth of industrial noises to put to the image, creating a jostling experience of a world that is clearly not ours.

The absence of a specific time or place in Ayoade’s tale lends to Simon’s existence as “a bit of a nonperson,” as one of his coworkers puts it. With a vague data-collecting job, an inconsequential apartment and an exceedingly timid personality, Simon rides in the backseat of his own life, no matter how hard he tries to grab the wheel.

This brings to mind the themes of director Edgar Wright’s films Shaun of the Dead, Hot Fuzz and The World’s End, where the community at large seems to be in on some conspiracy that the protagonist is not. Simon is one of those guys that can't get their opinion across—partly because of his own social anxieties, but also because he lives in an absurd society where nobody follows reason.

It’s this lack of reason where Ayoade finds his creative pulse, taking advantage of a world without rules, or at least rules we are familiar with. He embraces mundane life’s surrealism to capture something entirely unordinary.

Carrying that instability on his shoulders, Eisenberg brings a duality to Simon, a seemingly flat individual, with precise movements and change of tone. Utilizing his characteristic fast quibbling dialogue, the actor is able to alter it knowingly between Simon and James. This is most effective when we see Simon/James do a switcheroo on a date with their love interest Hannah, played by a wonderfully whimsy Mia Wasikowska (Only Lovers Left Alive, Alice in Wonderland).

Although The Double may not be the most harrowing or authentic story within the “dual personality” genre, Ayoade left a keen visual impression. When you close your eyes, you’ll see Hannah serenely swaying in the bumping subway car’s window, with nothing else in the world existing as the snow feathers in front of her.

So, if not for Simon’s point of view, perhaps simply go see The Double for Ayoade’s.

The Double opens in Los Angeles at The Nuart and in New York at Sunshine Cinema 5 on Friday, May 9, 2014. The film will also be available on iTunes and OnDemand.

Enter to win a FREE POSTER for The Double, here!