BBQ is Coming to Town 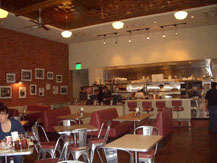 Untitled Document Texans will talk your ear off about their legendary barbecue. Kansas City natives boldly assert their pit-masters’ superiority. If you ask about BBQ in Memphis, they won’t tell you how good it is … they’ll just feed you. These people are serious about their ‘cue.

I feared that I would never have the pleasure of savoring the rubs, wet sauces, and smoked-for-days flavor that define these distinguished grilling centers. But thankfully, Los Angeles has seen a rise in BBQ joints that could very well transport us to hog heaven.

Think home. Think laughter. Think family. Oh, and think lots and lots of napkins. Barbecue in L.A. is just as messy, fun, and dare I say, tasty, as the real deal. The following five joints seem to have mastered the various techniques and elevated barbecue to an art form.

The baby-back pork ribs at Tasty Q have such a deep hickory essence, they evoke images of someone slaving over a pit for days, lovingly basting each rib to perfection. Their skin is a dark, rich brown. One bite reveals pink, moist meat. The harmonizing sauce does not overpower the tender meat.

For 11 years, manager Angie has been satisfying all carnivorous cravings. Tasty Q’s menu champions sliced beef (bought by the pound or assembled onto a bun), beef ribs, pork ribs, chicken and sausage links. Choose between a 1/4, 1/2 or 1 full bucket of rib tips. Lunch specials are reasonably priced ($7) and contain 1 pork rib, 2 beef ribs, 1/2 link, and any two sides. Each meal is also served with a shining white piece of Wonder Bread.

Too lazy to actually walk into this no-frills restaurant? A drive-through is the answer to your sloth. Frying your own turkey for Thanksgiving can be a dangerous undertaking, so take your bird to Tasty Q, and they will do it for you. Tasty and helpful!

How could you not love a restaurant whose slogan reads, "It’ll make your tongue wag?" At night, Zeke’s large windows offer a clear view of bustling Santa Monica Boulevard, yet the dimly lit space feels homey and intimate. Zeke’s offerings reflect that same balance, with a menu that features both traditional and innovative fare.

Do not leave without sampling Zeke’s American BBQ dinners. How could you resist two sides (slaw, beans, potato salad, fries … the list goes on) and a plate of Memphis baby-backs or Kansas City spare ribs? The applesauce is a must, with surprising hints of cranberry and cinnamon.

A side of sweet potato fries completes the meal. Hmm, maybe the meal ends after dessert. Best bets are a hot fudge sundae and the giant brownie. Zeke’s is the ideal spot for a more refined BBQ experience.

You cannot help but smile and maybe giggle a little upon walking into the adorable Mr. Cecil’s. The restaurant is shaped like a silo, and that humorous decoration is sustained in the interior. The restaurant is tiny – there are four booths, a couple of tables, and only eight stools at the bar. This is down-home dining at its best.

The walls are painted with a fake exposed brick motif, and barn paraphernalia is strewn about the restaurant. Models of cows, pigs, and ranches cover every surface. If the "Three Little Pigs" is your favorite tale, then get your tail over to Mr. Cecil’s.

Catfish nuggets are nicely fried and casually served in a red plastic basket. The St. Louis style ribs are gamey and profoundly meaty, while the tri-tip soft tacos offer an ethnic twist to a comfort dish. The cornbread is memorable in its grainy texture and sweet undertones.

The grilled corn with chili lime butter was not exactly a jaw-dropper, but the BBQ baked beans (salty, sweet, and delicious) more than made up for it. If you truly can’t steal yourself from the city, you may want to reconsider and come to

You might have driven by The Pig a thousand times on your way to Pink’s or to any other Hollywood restaurant. After eating here, you will wonder how you never noticed the huge, pink neon sign that reads, "The Pig" in bubble letters. More importantly, you’ll be amazed that you’ve lived without eating the delicious Bar-BQ half-chicken glazed with hot vinegar.

This Memphis-style BBQ gets its unique flavor from an oak, hickory and apple wood smoker. Owner and chef Daly Thompson has won awards across the country for his sweet mustard barbecue sauce, the Smokin’ spicy sauce and the "Rub Me Tender" barbecue seasoning. He also happens to be one of the nicest guys you’ll ever meet.

OK, back to the chicken. The crispy skin encases meat that easily falls off of the bone. I sat for a good couple of minutes silently taking small licks of the sauce. I still could not identify the ingredient that was luring me to take bigger and bigger bites.

The side of Cajun coleslaw was bright pink, light and crunchy. The jalapeño corn bread transported me to summer nights on the porch, savoring an ear of fresh corn. Daly said I couldn’t leave without a homemade double fudge brownie. How could I resist? There are really no words to describe it. Just make sure you get one, or three. You’ll never miss that neon sign again.

Woody’s could not be any more different than Mr. Cecil’s. In fact, the drive to any of Woody’s outposts is proof enough that BBQ comes in all shapes and sizes. Do not be deterred by run-down buildings, graffiti-laden shacks and train tracks bordering the suspicious locations, because this BBQ is the pig’s grunt (the BBQ version of the "cat’s meow").

Woody’s does not put any effort whatsoever into mood, lighting, and interior decorating. Here, the focus is meat. Woody’s is take-out only, and the plethora of mouthwatering options might have you contemplating your order forever. "What is the best thing you guys have," I asked the woman behind the counter. "Oh honey, everything’s good," she responded. This was going to be tough.

The beef ribs with a mild sauce won the battle. The ribs were enormous at about 8 inches long and as thick as a fist. At least ten napkins were harmed in the devouring process. The ratio of lean beef to marbled fat was almost mathematical in its eye-popping goodness. The sauce was simultaneously sweet and tart, and a hint of vinegar was evident in each bite. It left a slight tingle on the tongue. The beans were probably from any standard can, but they were scrumptious, sugary and chewy.

After 30 years of being one of the most beloved BBQ havens in L.A., Woody’s represents the heights to which truly outstanding BBQ can soar.
Article posted on 2/13/2006
This article has been viewed 3050 times.