Clippers are ‘Pretty Much Focused’ on Game 2 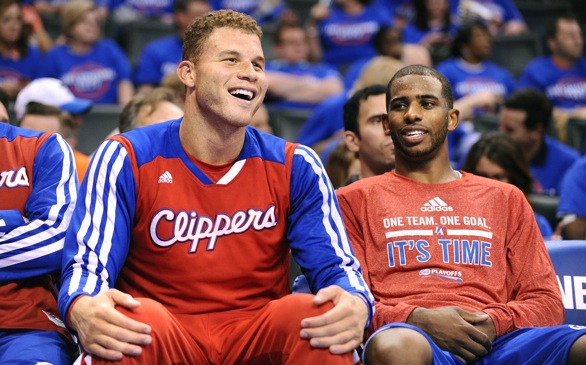 Blake Griffin, left, and Chris Paul sit on the bench in the 4th quarter against the Oklahoma City.
(Credit: Wally Skalij/Los Angeles Times/MCT))

OKLAHOMA CITY — No matter how much Los Angeles Clippers Coach Doc Rivers has tried to steer his players away from the controversy surrounding team owner Donald Sterling the last 10 days, something always seems to threaten to distract them.

Rivers said his team was “pretty much focused” on Game 2 of its second-round playoff series Wednesday night against the Oklahoma City Thunder.

Still, the Clippers were obliged to talk about the NBA’s announcement Tuesday that team President Andy Roeser was taking an indefinite leave of absence, effective immediately.

Rivers said he didn’t find out about Roeser’s departure until a team spokesman told him after they had finished practice Tuesday evening.

Rivers then told his players the news and offered advice. “I told the guys, ‘Just keep playing. We got it. We’ll handle everything,’” Rivers said.

And how did his players respond?

“Right now, they don’t respond anymore,” Rivers said. “I think they’ve heard so much stuff lately that they are just moving forward.”

The Clippers won Game 1 in the best-of-seven series on Monday night, 122-105. Game 2 is also at Chesapeake Energy Arena, but the Clippers say they are not content with just one victory over the Thunder.

“We may get those same shots tomorrow and they may not go in. But it may be somebody else who has to step up or defense has to win the game.”

The Clippers made shots from everywhere in Game 1, connecting on 54.9 percent of their field-goal attempts and 51.7 percent (15 for 29) from three-point range.

Paul was the best player in the opener. He scored 32 points, missing just two of 14 shots and hitting his first eight three-point attempts.

“The next game, I might have 12 points, 10 points or maybe not even that many,” Paul said. “I think I’m one of those people that whatever it takes to win, I don’t care.”

The Clippers had some good news to talk about Tuesday when they found out that All-Star power forward Blake Griffin finished third in voting for the NBA’s most valuable player award, and Paul finished seventh.

“I’m honored, humbled by that,” said Griffin, who averaged 24.1 points and 9.5 rebounds per game during the regular season. “It was a two-man race. But it’s definitely cool to be in that.”

In Game 1 against the Thunder, the Clippers took control in the first quarter, outscoring the Thunder 18-5 in the last 4 minutes 9 seconds to build a 39-25 lead. They weren’t threatened the rest of the way and led by as many as 29 points in the fourth quarter.

Still, the Thunder outrebounded the Clippers 47-31, and Rivers said his team can play better.