Kershaw is Back, Dodgers Benefit 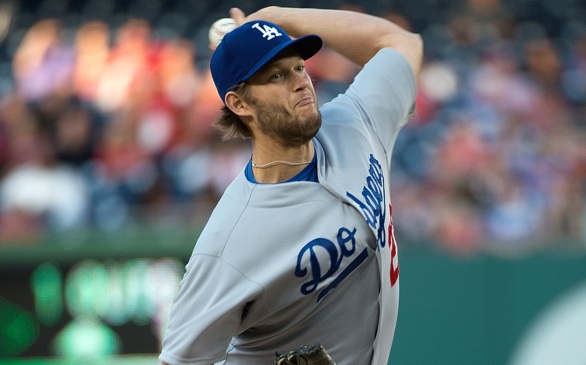 WASHINGTON — Even when he was healthy, Clayton Kershaw would busy himself between starts by standing in a clubhouse hallway, loudly bouncing a baseball off a wall.

But during his recent six-week stint on the disabled list, Kershaw often moved his game of handball to the wall outside Don Mattingly’s office. It was his way of reminding the Dodgers manager that he was still there and he could still throw a baseball.

“He was grumpy,” Mattingly said. “He just wants to pitch.”

On Tuesday, Kershaw found another way to get Mattingly’s attention, shutting out the Washington Nationals for seven innings in an 8-3 victory that guarantees the Dodgers a winning record on a nine-game, three-city trip that ends Wednesday.

The left-hander wasn’t at this best, spending much of the game pitching out of the stretch after giving up nine hits, all singles. But he was efficient, and with the help of two double plays and his pickoff of a runner at first base, he faced only seven batters over the minimum.

He struck out nine batters and did not walk any, needing only 89 pitches, including 68 strikes, to get through seven innings.

“It’s nice to have him back,” Mattingly said, knowing that Kershaw’s return not only solidified the Dodgers’ rotation but had probably quieted the noise outside his office as well.

“He shows you right away what you’ve been missing. Just a guy that brings that to the table every five days, it’s a little reminder of just who he is and what he means to you.”

Kershaw, who won his second Cy Young Award last season, made one start this season, beating the Arizona Diamondbacks in the season opener in Australia, before going on the disabled list for the first time in his career because of a strained muscle in his upper back. And the time off, he said, made him appreciate the game more.

“You get something taken away from you, you realize how much you miss it,” he said. “You don’t want to take this game for granted. And sometimes you take your health for granted when you’ve been healthy. I’m going to try not to take that for granted anymore.

For the Dodgers, their time without Kershaw may have made them appreciate him more as well. Only twice this season has a Dodgers starter gone further than the seven innings Kershaw pitched Tuesday. And only Hyun-Jin Ryu has taken a shutout that far.

So for an exhausted bullpen that began Tuesday leading the majors in innings pitched, Kershaw’s return brings the possibility of some much-needed rest.

“He’s different,” Mattingly said. “The day before you’re willing to use a [reliever] because you’re feeling like Clayton’s going to give you six. And he’s got a good chance to go seven or eight.”

On Tuesday, Kershaw did more than rest the bullpen and shut out the Nationals. He also kick-started the offense, hustling down the line to beat Blake Treinen’s throw to first base after the pitcher bobbled Kershaw’s dribbler, starting a three-run rally.

“It was good to get back out there and compete with the guys again. It was fun,” Kershaw said. “I just like to play the game the right way. No matter if you’re a pitcher or not. I respect it when I see other guys doing it, so I try to do it as well.”

And it’s that attitude maybe even more than the low-90s fastball, the darting slider and the knee-buckling curveball that the Dodgers missed while Kershaw was playing catch with himself outside his manager’s office.

“Kersh is different from a lot of guys,” Mattingly said. “With Kersh you get a guy that’s going to just be kind of all in every day in every aspect. Running to hitting to fielding, the whole package.

“He’ll be in in the morning doing a crazy workout to get ready for the next one. This one’s over and he’s not going to sit here and (say) how good he was today. He’ll be working on his next start. It’s just relentless. It’s what makes his special.”