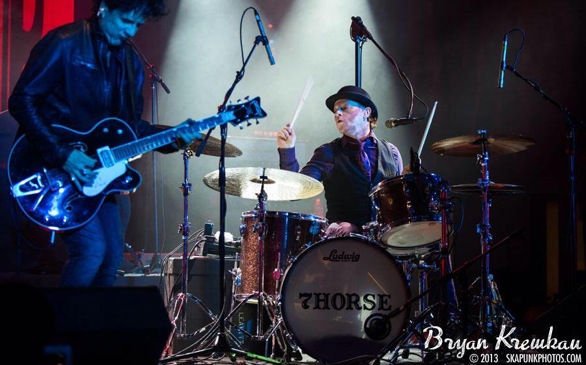 7HORSE: SONGS FOR A VOODOO WEDDING
If you’ve seen the film The Wolf of Wall Street you’ve heard the music of 7Horse; director Martin Scorsese gave the duo’s manic “Meth Lab Zoso Sticker” his seal of approval and as a result the tune is featured prominently in the film’s trailer, in the movie itself and on the original soundtrack compilation.

But now Joie Callo and Los Angeles-based Phil Leavitt are planning to really put a spell on their fans with their forthcoming release Songs for a Voodoo Wedding.

Not the type of band to do anything unauthentic, 7Horse drew inspiration for the new record by actually attending a voodoo wedding ceremony in New Orleans. Speaking of inspiration, the blues rocker’s muse for the countrified ode to marijuana “A Friend in Weed” might seem obvious but there’s a little more to it; the song was actually written as the guys were on their way to play at a music festival in the tiny Northern California town of Weed.

Songs for a Voodoo Wedding drops on June 10.

The film chronicles Cooper’s career from his early days fronting a band in Phoenix to worldwide stardom and status as the originator of the shock rock genre. Much of the story is told in Alice’s own words (real name: Vince Furnier), but a disparate bunch of rock stars, including Elton John, Iggy Pop, John Lydon (Johnny Rotten) and Dee Snider, also add commentary.

HAVE A BEER AND A BUELLTON
Santa Barbara band Buellton has come up with a spirited way to get their fans to take a swig of their new album, Silent Partner.

The indie rockers have teamed with the also Santa Barbara-based Telegraph Brewing Company to release the record on a beer bottle.

Pop the top on specially-marked bottles from Telegraph, and you’ll find a download code for Silent Partner under the cap, while the label on the bottle replicates the album’s cover and liner notes. The beer is available now, but if you want a regular download or vinyl copy, you’ll have to wait until June 17.

MAYHEM: 2008-2013
Here’s a great way to get ready for this year’s Rockstar Energy Drink Mayhem Festival, coming to the San Manuel Amphitheatre in San Bernardino July 5. Just released is Mayhem: 2008-2013, a 300-page hardcover book of photos taken by L.A.-based photographer Strati Hovartos and filled with shots taken during the last six Mayhem Festivals.

Slayer, Rob Zombie, Korn, Avenged Sevenfold and Slipknot are among those featured in performance and behind-the-scenes photos.

If you’re going to this year’s event and buying your ticket through Ticketmaster, ask about the ticket-and-book package deal.

ONE LOVE, ONE RHYTHM: THE OFFICIAL 2014 FIFA WORLD CUP ALBUM
“Dar um Jeito (We Will Find a Way)” featuring Carlos Santana, Wyclef, Avicii and Alexandre Pires is the official anthem of the 2014 FIFA World Cup, and you’ll find it on the just-released One Love, One Rhythm album along with songs from Pitbull with Jennifer Lopez and Claudia Leitte, Ricky Martin, the Isley Brothers, Bebel Gilberto and Lang Lang, Psirico, Shakira, Baha Men and several others.

A deluxe edition with remixes of the Pitbull cut and “Tatu Bom De Bola” by Arlindo Cruz is also available.

HALF NOTES
BABES – They call themselves a family of dropouts, but siblings Aaron, Zach and Sarah and their “blood brothers” Bryan and Jeffrey haven’t been slacking off so much that they can’t put out new music; their self-titled E.P. drops on May 27, and you can hear the new music early when Babes plays the Echo on May 15.

THE CHIMPZ – Save up your bananas so you can purchase the new self-titled E.P. from this L.A. rap metal band the day it drops, May 15.

THE GENERATORS – This veteran Los Angeles punk band has been rocking for more than two decades and they ain’t stoppin’ now; tenth album Life Gives – Life Takes has just dropped this week.

SINNER SINNERS – They met in France as teenagers, but now Steve and Sam Thrill are married and making punk-flavored rock’n’roll in Los Angeles; their new album XI is out now.