This Time, Clippers Lose as Durant and Westbrook Have Breakout Games for Thunder 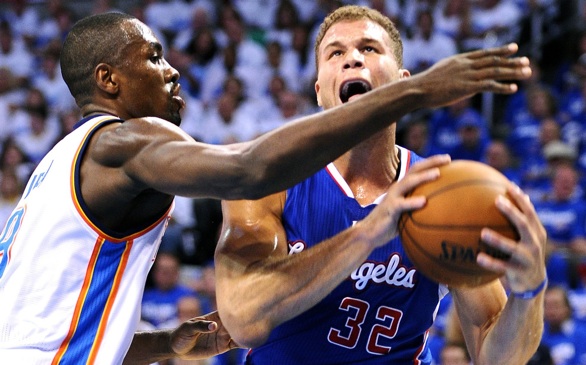 OKLAHOMA CITY — After Kevin Durant lifted the NBA’s Most Valuable Player trophy over his head before Wednesday’s Game 2, he asked his hometown fans for help.

“We need to win this game,” Durant said.

Behind the MVP and Russell Westbrook, the Thunder’s stars made sure it happened, beating the Clippers 112-101 to even the second-round series.

Westbrook recorded a triple-double with 31 points, 10 rebounds and 10 assists, and Durant dropped 32 points to go with 12 rebounds, finishing an assist shy of a triple-double as well.

Teammates have never recorded triple-doubles in the same postseason game.

While Westbrook and Durant were the two best players on the court, Oklahoma City got plenty of production from other places.

“We can win if they both have good offensive games,” Clippers coach Doc Rivers said of Westbrook and Durant. “What we can’t do is give them that and everything else.”

After an emotion-soaked speech Tuesday when he was announced as league MVP, Durant and the Thunder got off to a great start Wednesday.

Durant scored 17 first-quarter points after drilling his first shot, a 3-pointer, to get the home crowd excited.

“It was the perfect storm,” Jamal Crawford said. “They did everything they wanted.”

The Clippers survived that storm, though, and fought back to take a small lead late in the second quarter.

But the Thunder closed the half on a 6-0 run before blowing the game open in the third, when everything went wrong for the Clippers. The turned the ball over six times in the quarter — twice on inbounds passes.

Rivers bemoaned his team’s execution, saying “we weren’t there physically tonight or mentally either.”

The Thunder lead grew to 20 points before the Clipper bench cut it to 11 in the final 3 minutes, but the final result was never in doubt.

J.J. Redick led the Clippers with 18 points, but he scored only two in the second half.

The NBA’s Sixth Man of the Year, Jamal Crawford, struggled, scoring only seven points on 2-of-13 shooting.

“I got great shots,” Crawford said. “I wish we could play another game tonight. They were good looks.”

After scoring 32 points Monday night, Paul finished with 17 – thanks in part to some early foul trouble. Paul was also called for a technical foul for arguing with officials from the bench.

“I’m going to keep my money,” he said when asked about the technical.

While the Clippers don’t head back to Los Angeles with momentum, by getting a split they’ve grabbed control of the series.

Rivers said he knew his team wouldn’t be able to put the Thunder away without them pushing back.

And it’s going to stay hard on the Clippers if they don’t figure out ways to slow down Durant and Westbrook.

“They were the aggressors,” Crawford said. “They did what they came to do to us tonight. …We’ll make the proper adjustments.”

STERLING’S WIFE SAYS SHE SHOULD OWN TEAM

Donald Sterling’s wife Shelly issued a statement Wednesday saying she should be the owner of the Clippers if her husband is forced to sell the team.

“I have been co-owner since 1981,” the statement said. “During those 33 years, I have been a diehard fan even when the team was in the basement of the league. Now that all of our hard work is paying off, I want to celebrate the success that we are finally achieving.”

Shelly Sterling is being represented by Pierce O’Donnell of Greenburg Glusker on the matter.

Meanwhile, the league’s advisory/finance committee had its second conference call to discuss the Clippers front-office situation.

The committee discussed the on-going search for a league appointed CEO, meetings held between NBA deputy commissioner Mark Tatum and Clippers staffers and the next steps in removing Donald Sterling from ownership.

The committee will reconvene next week, the league said in a statement.

The Clippers’ front-office problems continue to happen against the backdrop of their series with the Thunder, as longtime President Andy Roeser took an indefinite leave of absence Tuesday.

Hours before the Clippers and Thunder met in Game 2 on Wednesday, Jared Dudley was already on the court, sweating through his shirt.

More often than not, this would be all the work Dudley would get.

After struggling through the first half of the season, Dudley lost his starting spot to Matt Barnes. After the team signed Danny Granger, Dudley stopped seeing the floor, sitting eight times in a 10-game span.

But with Hedo Turkoglu down and the Clippers needing bodies to throw at Kevin Durant, Dudley suddenly has found himself back in the Clippers’ plans.

“It’s a great example,” Coach Doc Rivers said. “It’s a long season. You never know, if you stay ready, when you’re going to get your number called and how you can help a team. Jared has done a very professional job of that.”

When the Clippers traded for Dudley before the season – a deal that cost them Eric Bledsoe and Caron Butler while netting them J.J. Redick as well – they thought they were getting their starting small forward. That didn’t work out.

Instead of pouting, Dudley stayed level, knowing he could play for or with anyone in the locker room down the road.

“If I spurn this locker room and act (unprofessional), people will remember that,” Dudley said.

So, he quietly has done his job – which Wednesday included five quality minutes at the start of the second quarter. He didn’t score and he grabbed only one rebound, but Dudley was a positive presence.

“He’s been a great teammate,” Rivers said. “That’s all we need him to be – and to stay ready.

A bank of lights went out with 27.1 seconds left in the first half, causing a brief delay. Rivers and Thunder coach Scott Brooks agreed to finish the half with partial lighting. Midway through halftime, the lighting was fixed. ... NBA commissioner Adam Silver presented Kevin Durant with the MVP trophy before the game.

Basketball
LaVar Ball: Reuniting his sons would be ‘biggest thing in NBA’
1,449 views