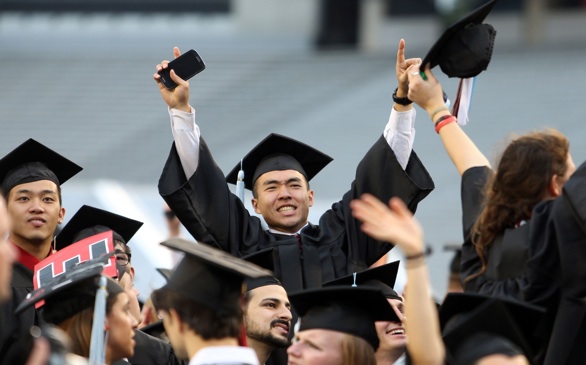 America’s jobs machine finally may be churning out jobs for new college grads.

That is particularly true for students who majored in math or science, though the number of jobs available in those fields varies greatly from state to state.

Some 64 percent of hiring professionals surveyed by the Chicago-based consulting company Challenger, Gray & Christmas last month said that their companies plan to recruit from the pool of 1.8 million college graduates who will enter the job market this spring. Employers in February had about 4.2 million unfilled jobs, according to the U.S. Bureau of Labor Statistics.

Last year, graduates with degrees in math and science had two times as many entry-level jobs to apply for than students with other majors, primarily because not as many students are pursuing these degrees. On a per capita basis, Colorado topped the list in math- and science-related job openings in 2013, while Mississippi was last, according to data released this year from a labor market consultant group Burning Glass Technologies, based in Boston.

After Colorado, states that had the most entry-level STEM jobs per capita last year were Alaska, Massachusetts, Washington state and Maine (see list).

Overall, starting salaries for 2014 graduates have increased 1.2 percent from a year ago, the National Association of Colleges and Employers reported last month. The biggest jump occurred in health sciences, where salaries increased 3.7 percent, the group said.

The latest jobs report released last week showed the U.S. unemployment rate fell to 6.3 percent in April. Private-sector employment in March surpassed the prerecession peak. Though the unemployment rate for 20- to 29-year-olds who graduated from college in 2013 was still 10.9 percent, that figure was down from 15.5 percent in 2009 when the recession was ending, the most recent data from the U.S. Bureau of Labor Statistics show.

“All of these trends bode well for those entering the job market this spring,” said John A. Challenger, chief executive officer of Challenger, Gray & Christmas.

Not everyone is so optimistic. Heidi Shierholz, an economist with the Economic Policy Institute, a left-leaning think tank in Washington, D.C., doubts that the economy has really turned around for young college grads. “Since the unemployment rate of young college graduates remains significantly elevated, the class of 2014 will join a sizable backlog of unemployed college graduates from the last five graduating classes in an extremely difficult job market,” Shierholz said in a new report.

The number of STEM jobs available in each state were gleaned from the 2014 analysis of entry-level jobs posted on more than 32,000 online websites last year by Burning Glass Technologies. Since up to 90 percent of job openings for college-educated workers are posted online, looking at online job postings provides information on the types of jobs that employers are seeking to fill and where .

Colorado, with a labor force of 2.4 million, has a rapidly emerging information technology sector to complement a strong base of defense contractors with large STEM workforces and robust manufacturing and health care sectors, said Matthew M. Sigelman, chief executive officer at Burning Glass Technologies. More than 152,000 STEM jobs were posted in Colorado last year, of which nearly 44,000 were entry-level.

Alaska’s health care industry exerts an outsized influence on the state’s job market. In 2013, this sector’s openings constituted 21 percent of all postings in Alaska, while health care accounted for only 15 percent of all postings in the U.S., he said. Of the 20,000 total STEM jobs posted last year, more than 13,000 were related to heath care. Alaska’s labor force topped nearly 360,000 in March.

Sigelman said many more good jobs involve math and science skills but are often not considered traditional STEM jobs, including many in health care, which can require substantial biological sciences knowledge. And the math skills demanded for many business and data analysts are in far greater demand than the traditional math roles for statisticians and actuaries.

Of all the entry-level jobs requiring a bachelor’s degree or higher last year, nearly half were in fields that required math and science. But less than 30 percent of the bachelor degrees earned were in the sciences and math, Sigelman said.

Each new four-year graduate in STEM fields has access to 2.5 entry-level job postings, compared to 1.1 postings for each bachelor’s degree graduate not in math or science, he said.

California, with a labor force of nearly 19 million, ranks 25th on Sigelman’s list for entry-level STEM jobs. The state’s size plays a role but so do other aspects of California’s economy, which is the eighth-largest in the world. “While there is tremendous STEM demand in places such as Silicon Valley and, to a lesser extent, Los Angeles, job demand in California is spread across a large and diversified industrial base,” he said.

In 2013, California’s most in-demand occupations ranged from computer and math jobs to management and sales positions, which “reflects the eclectic mix of roles demanded by California employers,” he said. Moreover, many engineering and manufacturing jobs have been moving out of state, further reducing the relative influence of STEM jobs on California’s job market.

Of all job openings, software developers are the most in demand, followed by information technology professionals, sales representatives and registered nurses, according to an April report from Georgetown University’s Center on Education and the Workforce.

There were 3.7 million job openings each month in 2013, up from 2.3 million at the height of the recession, the university said.

“As the economy continues to recover from the recession, employers are looking for college graduates who can fill jobs in STEM, management and professional fields,” said Tamara Jayasundera, a co-author of the report.

Certain majors have shown much grimmer unemployment rates than others. Political science, film and photography, anthropology and architecture majors all had jobless rates over 11 percent, a 2013 Georgetown study showed. Nursing and elementary education majors had the lowest unemployment rates at about 5 percent, followed by physical fitness, chemistry and finance majors, all under 6 percent.

The number of jobs requiring a math or science background is expected to grow 55 percent faster than other job categories, according to the U.S. Bureau of Labor Statistics.

But not all is lost for liberal arts graduates.

New York City, for example, last year had 66,000 postings open to liberal arts graduates with sales background and another 47,000 with social media skills. Los Angeles posted 28,000 business and 25,000 marketing jobs while Washington, D.C., had 25,000 in sales and 22,000 in general business, according to a 2013 Burning Glass Technologies report.

The government reported this month that the number of unemployed persons, at 9.8 million, decreased by 733,000, one of the strongest showings in the recovery.

But young male graduates have had a much tougher time than their female counterparts finding jobs. Unemployment peaked at 26.6 percent for recent male graduates aged 20 to 29 in October 2009, more than twice the rate for young women graduates. Last year, those rates declined to 13.7 percent for men and 9 percent for female college grads 20 to 29 years old.

This gender gap in unemployment is likely because of the kinds of jobs young men and women are seeking. More young females are entering nursing and teaching, which are less sensitive to downturns, Shierholz of EPI explained.

States With Most Entry-Level STEM Jobs