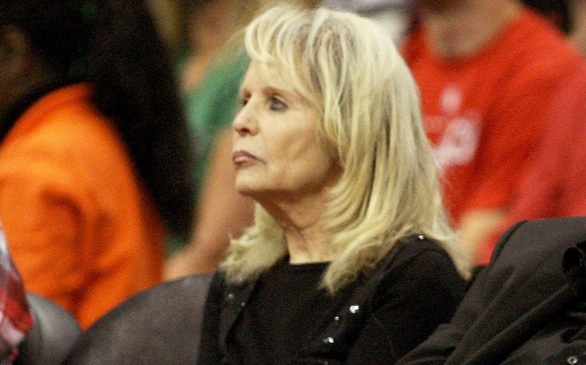 His wife is making that more complicated. Sparking criticism across Los Angeles and setting the stage for a potential legal battle with the NBA, Shelly Sterling announced her intention this week to keep ownership of the team within her family.

Clippers coach Doc Rivers did not comment on his personal feelings toward Shelly Sterling’s ownership, but said it would be “a very hard situation” due to her connection with Donald.

“I think it’d be very difficult,” Rivers said Thursday. “I guarantee you every person wouldn’t be on board with that. Whether I would or not, I’m not going to say, but I just know that would be a very difficult situation for everybody.”

“I will say that I don’t know what she’s done wrong,” he continued. “But I think it’d be a difficult situation, because we wouldn’t know who was really in charge.”

Rivers said he has not spoken to Shelly Sterling since their initial conversation after news broke of Donald’s racist comments.

Although she had been named in past discrimination lawsuits against the Sterlings, she was not included in the lifetime ban. All 30 league owners must still come up with a majority three-fourths vote in order to force Donald Sterling to sell the team. A league source with knowledge of the situation confirmed that the Sterlings have a trust in the Clippers, divided as a 50-50 split.

Asked whether it would be appropriate for Shelly Sterling to attend Clippers games, Rivers was again mum on Thursday.

“There’s no playbook,” he said. “I think what’s ‘appropriate’ is what everyone thinks is appropriate. Not whether I think it is or not. It’s what the masses think. And that doesn’t mean the masses are right. If we’ve learned anything, it’s that the masses can be wrong in this.”

Shelly Sterling’s push to retain ownership in the team drew concern Thursday from some housing groups representatives, who pointed to lawsuits that accused Shelly of racist behavior.

In a lawsuit filed in 2007, Darrell Rhodes, a tenant in a Donald Sterling-owned Koreatown apartment on Irolo Street, alleged Shelly Sterling called him a “black mother----er.” Shelly denied the allegations in court filings.

The lawsuit, along with other filings led by the United States Department of Justice, led to a $2.75 million settlement. Both Donald and Shelly were named in the federal case.

In another lawsuit that preceded the Justice Department filing, residents living in the same Irolo Street property also alleged discrimination based on race. The lawsuit, filed by the Los Angeles-based Housing Rights Center, alleged Shelly Sterling posed as a health inspector in order to“ intimidate African-American and Latino tenants.”

The incident was video-taped by one tenant.

Chancela Al-Mansour, Executive Director of the Housing Rights Center, said in an interview Thursday tenants complained of being targeted by Donald and Shelly.

“The African-Americans who were the plaintiffs, they believe that both of them acted jointly and separately to perpetuate discrimination,” Al-Mansour said.

Long before the scandal broke two weeks ago. Larry Gross, executive director of the Coalition for Economic Survival, boycotted Clippers games. The Sterlings have an abysmal record, Gross said, pointing to discrimination lawsuits filed by tenants.

Gross said he is angry Shelly Sterling was still going to games during the playoffs.

“She is a partner in crime with him on all these housing discrimination issues,” Gross said.

Sterling’s attorney, Pierce O’Donnell, released a statement defending his client, saying that her detractors were basing their claims on “allegations and rumors.”

“They are doing so in a rush to judgment and in error,” O’Donnell said. “These claims are based on allegations lifted from legal proceedings, none of which resulted in a finding of discrimination against Mrs. Sterling or the Sterlings’ companies.

“Mrs. Sterling has made it clear that she abhors the attitudes reflected in her estranged husband’s recent remarks and that she supports the NBA’s decision to ban him for life. They may share the same name, but they don’t share the same values on race.”

That argument likely won’t sway many in the Los Angeles community.

Civic leader and Los Angeles Police Commission president Steve Soboroff, a driving force behind the construction of Staples Center, said Thursday Shelly is too “tied into” the web of Donald Sterling.

Given the new racist charges leveled at Donald Sterling, Soboroff doesn’t support Shelly retaining ownership in the Clippers. The public perception is that she is part of the problem, he believes.

“The Sterlings need to go away,” Soboroff said.