LOOK: 5 Bands You Need to See this Summer at the Greek Theatre 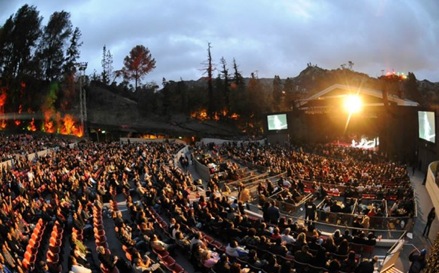 The Greek Theatre is perhaps one of the best venues in Los Angeles to see a concert during the summer.

It’s an open outdoor arena, with an easy-access snack and drink (including alcohol) bar and tons of seats. On summer nights, the temperature is just right, and the Greek looks beautiful as colorful lights flash across the stage and audience.

This summer, make sure you check out these five bands who will performing at this iconic L.A. venue.

1. Panic! at the Disco
Date: Tuesday, Aug. 26
I’ve had a soft spot for these gents from Las Vegas since I was in the seventh grade.

Much to the joy of the 13-year-old inside me, they have continued to stay relevant and churn out some solid records. (If you don’t believe me, check out the video for “Miss Jackson” off their most recent effort, Too Weird to Live, Too Rare to Die!)

Though the lineup has changed considerably since I first saw them, lead singer Brendan Urie never fails to put on a show, throwing himself into each performance with such gusto that it always seems like it’s something special to him. The band is nothing less than theatrical in every performance they give, with lights and on-point showmanship.

2. Counting Crows
Date: Sunday, Aug. 17
The Counting Crows have certainly been around long enough to be seasoned veterans at putting on a live show. However, the personal nature of all of Adam Duritz’s lyrics makes every performance a new experience.

He’s telling stories often about his mental state's fragility, and therefore adds new elements, new interludes and new verses. Even if you’ve heard the songs on the record, you haven’t heard the live version of them (“Round Here” has been known to stretch on for upwards of 12 minutes when performed live).

This band is not known for its over-done theatricality or the intensity of pyrotechnics; Counting Crows is known for putting on a genuine, emotional experience. The music means something to Duritz, and with the strength of that, it ends up meaning something to the audience as well.

3. New Order
Date: Sunday, July 13
Before there was dubstep, there were the sythn-y sounds of New Order.

Given the fact that the band is currently on its second reunion, the band has clearly been through quite a bit.

After the suicide of Ian Curtis, the lead singer of Joy Division, the members came together and completely transformed their sound, forming New Order. There is the undeniable fact that they can keep reuniting, and people will keep coming back for more.

The bandmembers are seasoned stage veterans, and their music is certainly fun to dance to. After all, there’s nothing better than partying like you’re an extra in a dance scene of "Degrassi."

The special guest performer, LaRoux, should certainly contribute to the dance-y vibe as well.

4. Jack Johnson
Date: Wednesday, Aug. 27
I don’t really know if having a bad time at a Jack Johnson concert is possible. One would have to hate feeling relaxed on the beach, and I really hate to imagine the life of whoever has that sentiment.

Johnson began his musical career after a surfing accident put 150 stitches in his head. He certainly recovered and still manages to keep the cheerful attitude of his native Hawaii alive in his music.

His sets have garnered a mellow reputation, and I can't think of a better way to spend a late August night.

5. The Neighbourhood
Date: Thursday, July 24
With the song “Sweater Weather” dominating the airwaves as of late, The Neighborhood is almost inescapable these days. However, these boys have more to give than just the single, and they seem poised to be a band you wish you’d seen back when you could get tickets.

The Neighbourhood's defining feature is its attempt to meld certain sensibilities of hip-hop and moody, indie rock, as well as its exclusively black and white aesthetic. There will undoubtedly be some screaming teenage girls at the show, but that doesn’t mean these boys can’t deliver live.