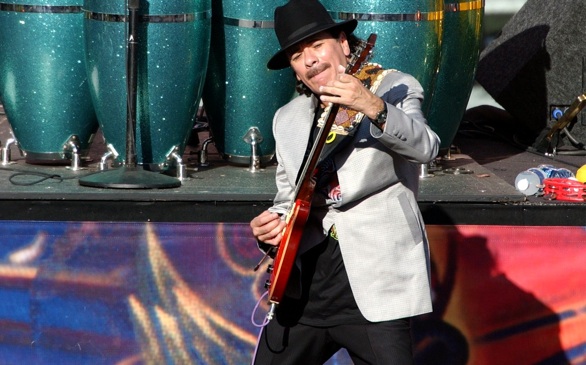 It was 45 years ago when Carlos Santana first, as they said back then, “blew people’s minds” with his fluid guitar playing style and Latin rhythms.

With a debut self-titled album that yielded the hits “Evil Ways” and “Soul Sacrifice” and a stunning performance at Woodstock, Santana opened the doors to the mainstream for generations of Latin musicians yet to come, many of whom appear on the guest star-studded Corazon.

With the World Cup about to take place in Brazil, it’s no surprise that the vibrant pop of “Saideira” features Samuel Rosa, lead vocalist for one of that country’s hottest groups, Skank.

The rest of the album is a Latin artist tour de force, with Juanes handling vocals on “La Flaca,” a tune that sounds very much like the Santana/Rob Thomas 1999 hit “Smooth;” Pitbull rapping on “Oye 2014,” an update of oldie “Oye Como Va;” Colombian hip-hoppers ChocQuibTown teaming up with Ziggy Marley for a take on reggae standard “Iron Lion Zion;” and Argentine superstar Diego Torres singing in English on love song “I Feel It Coming Back.”