From 'Mad Men' to God's Pocket & Another Glimpse of Philip Seymour Hoffman: Q&As w/Dir. John Slattery This Weekend. Details below. 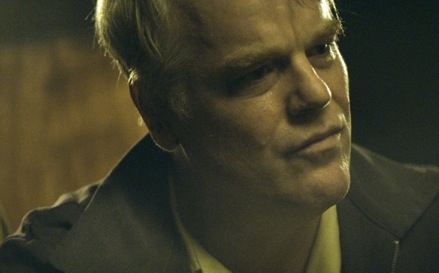 Longtime newspaper reporter Pete Dexter was severely beaten up after he went to a bar in South Philadelphia to talk to a man who had complained about a column he had written. The moment changed his life: He decided to become a novelist. The incident, however, found its way fictitiously into his 1983 book God’s Pocket, which has been been turned into a new movie opening in select theaters today.

For John Slattery and Christina Hendricks, two longtime stars of “Mad Men,” the small-budget God’s Pocket was a labor of love. It’s the first directorial feature for Slattery, who co-wrote the script. Besides Hendricks, it stars Richard Jenkins, John Turturro, Eddie Marsan and the late Philip Seymour Hoffman.

Slattery, who had known Hoffman for a couple of decades, says he waited for the Oscar-winning actor to be available to make the film.

“I didn’t want to think about anybody else,” he says, adding there were pressures on him to look elsewhere. Slattery didn’t approach anyone else for the film until Hoffman was ready. “As soon as Phil was involved, everyone said, ‘Yes.’?”

The loss of Hoffman still hangs over the film — and it hurts. In January, just two weeks before Hoffman died of a drug overdose, he was with Hendricks and Slattery for the premiere of God’s Pocket at the Sundance Film Festival.

“A great actor,” Slattery says simply about his friend, who was also a producer on the film.

The movie is set in 1978 in a tough Philadelphia neighborhood called God’s Pocket. Hoffman plays Mickey Scarpato, an amiable low-level criminal who hijacks meat shipments. Hendricks, her hair brunet rather than her familiar red, is Mickey’s wife, Jeanie. Early on in the film, her adult son is killed in an “accident” at a construction site where he worked.

Believing something else was going on, Jeanie pushes Mickey, who is having problems coming up with funeral expenses, to find out the truth about the death. The incident also has raised the interest of a local celebrity newspaper columnist (Jenkins) who is immediately taken with the vulnerable Jeanie.

Hendricks was drawn to the role because it was a “very intense slice of this woman’s life. She’s grieving for her son and desperately looking for love and acknowledgment while not getting the answers she needs.”

Slattery has directed Hendricks before in “Mad Men” episodes. In the series, he plays the womanizing, hard-drinking Roger Sterling, and Hendricks is Joan Harris, his onetime mistress who has worked her way up to the top echelons of the 1960s advertising firm where the show is set.

God’s Pocket created a new dynamic between them.

“It was fun working with John on the film because we had thoroughly and deeply explored Roger and Joan,” Hendricks says. “But this was completely new people with different scenarios and in a different time period.”

A feature film, especially a low-budget indie with a 24-day shoot, was a different animal for Slattery, 51. On “Mad Men,” he says, “Many decisions are made beforehand, but with the film, there was something new every day.”

It was shot in Yonkers, N.Y., as a substitute for Philadelphia in the ’70s. “Finding places where you can film without interruption of contemporary nature wasn’t easy on this kind of budget,” he says.

The only other person Slattery approached early about the film besides Hoffman was Hendricks “because she had been getting all this attention for the series and was doing other films; so I thought I should at least get a placeholder in there.” Hendricks wasn’t at the first couple days of shooting when Slattery was getting his bearings, and when she did show up, the director says he felt a sense of relief.

AMC’s “Mad Men” is currently airing the first seven episodes of its final season, while Hendricks and Slattery are in the midst of shooting the final seven episodes, which will air next spring. Both of them are looking ahead to life after the series is over.

Hendricks, who turned 39 last week, made three films, including Slattery’s, during her last “Mad Men” hiatus. Lost River is a neo-noir fantasy film written, produced and directed by Ryan Gosling, in his directorial debut, which will premiere at the upcoming Cannes Film Festival. She’ll also be in the mystery Dark Places, based on the novel by Gillian Flynn (Gone Girl). She plays the mother of Charlize Theron’s character in flashbacks.

After Hendricks and Slattery finish shooting this season, it’s all over for “Mad Men” except for doing some press next year. That will make it 10 years since they shot the pilot for the landmark show. Because of contract disputes, the series hasn’t aired consistently, but Hendricks says it was always a home to come back to.

“Over that period,” notes Slattery, “you’ve gotten married,” he says, looking at his co-star. In 2009, Hendricks married actor Geoffrey Arend. Slattery, who has been married since 1998, has one son.

“People have had kids,” Slattery continues. “People bought homes. My kid was 6 years old when we started, and he will be 16 when it’s finished.”

As for what he will do next, Slattery doesn’t have anything set, but he has been reading scripts and books, looking for something to adapt; he wants to direct again. What he hopes is to find something “you just have to do. ‘Mad Men’ was like that. It doesn’t get better than that.”

Hendricks says they will walk away from the series feeling proud to have been on a show that has had cultural significance and has helped change the landscape of television. Leaving it, though, will bring “a sense of the jitters and excitement about the future,” she says.

“Like, get a job,” Slattery jokes, and they both laugh.

“Yeah, there are some exciting things out there.”