LOOK: 12 Summer '14 Indie Movies You Have to Watch 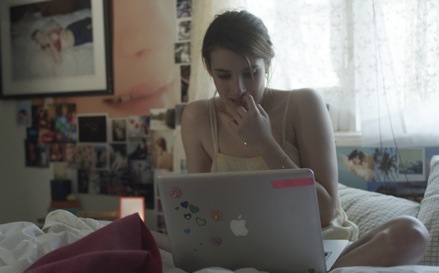 Don't underestimate the indie genre--this is where great films are made!

1. Palo Alto
Release Date: Now Playing (in select theaters)
Distributor: Tribeca Film
Gia Coppola (niece of Sofia Coppola) epically turns a short story into a full-length beautiful cinematic work of art. Based on James Franco’s short story of the same name, Palo Alto stars Franco, Emma Roberts, Nat Wolff, Jack Kilmer and Val Kilmer. In this drama, a shy girl named April embarks on a dangerous affair with her teacher. Meanwhile, an artistic boy named Teddy secretly carries a torch for April, and another teen tires to seduce Emily, who seeks validation through sex. Filled with promiscuity, teen angst and rebellion, Palo Alto explores what it’s like to be in suburbia high school in this day and age.

2. Filth
Release Date: May 30
Distributor: Magnolia Pictures
Psychotic, insane, twisted, sexy, warped—these are only a few of the adjectives used to describe Jon S. Baird’s Filth. Taking place in Scotland (of all places), the film features a heavily accented James McAvoy playing a detective who wants a promotion. However, his boss wants a murder solved, and McAvoy’s character (“Bruce”) must come up with some answers. Also starring Jamie Bell and Imogen Poots, Filth tragically and hilariously follows this detective’s quest to find answers, including answering one very important question: Is Bruce the man he really thinks he is? Expect a raunchy good time.

3. The Sacrament
Release Date: June 6
Distributor: Magnet Releasing
This horror thriller is about reporters who travel with a man on a journey to reunite with his sister. They arrive outside of the U.S. at an undisclosed location where they enter “Eden Parish,” a secret religious community that’s strikingly similar to the Jonestown cult. Run by a Jim Jones-like figure called “Father,” Eden Parish is not what it’s seems, and the curious travelers find themselves trying to escape for their lives. From Ti West (The Innkeepers) and Eli Roth (The Last Exorcism and Cabin Fever), The Sacrament is sure to be a chilling hit.

4. Supermensch: The Legend of Shep Gordon
Release Date: June 6
Distributor: Radius TWC
Mike Meyers makes his directorial debut with a documentary about Hollywood legend, Shep Gordon. After being close friends with Gordon for 22 years, Meyers explores the Hollywood insider’s life and career with insightful interviews from Gordon himself, Alice Cooper, Michael Douglas, Sylvester Stallone and others. It turns out Gordon is responsible for making a lot of people famous, ranging from musicians to “celebrity chefs.” Promising a little bit of humor, Supermensch will provide some insight on the entertainment world’s harsh truths as well as tips on how to become a successful manager like Gordon.

5. Gore Vidal: The United States of Amnesia
Release Date: June 6
Distributor: IFC Films
If you don’t know who Gore Vidal is, this film will tell you. Vidal has written 22 novels in addition to plays, movies (Caligula) and essays, and he’s considered a historical 20th-century figure who had a profound effect on literature, film, politics, historical debate and culture. Nicholas Wrathall’s documentary provides us with a solid final portrait of a man who is also considered one of the last lions of the age of American liberalism. Gore Vidal features final on-camera interviews with Vidal, Burr Steers, Christopher Hitchens, Jodie Evans and more.

6. Ivory Tower
Release Date: June 13
Distributor: Samuel Goldwyn Films
“Is college worth the cost?” We’ve seen this question float around in newspapers and on websites as tuition rates spiral at of control. Now, director Andrew Rossi is using his camera to explore higher education’s business model that has come to embrace a system that often promotes expansion over quality learning. Documenting big-name colleges such as Arizona State, Harvard and Stanford to smaller ones, including Spelman, Cooper Union and Deep Springs, Rossi explores this country’s higher education problem. A film that is both relatable and valuable for students everywhere, Ivory Tower is a must-see for anyone who is on the path towards getting a college degree.

7. Lullaby
Release Date: June 13
Distributor: Arc Entertainment
A film that is almost entirely comprised of Academy Award nominees and winners, Lullaby is a drama (maybe even a little bit of a “dramedy”) that stars Garret Hedlund as a man estranged from his family. When he discovers his cancer-stricken father (Richard Jenkins) wants to take himself off life support, Jonathan struggles to accept his father’s decision, and drama ensues. Also starring Amy Adams, Jessica Brown Findlay, Anne Archer, Terrence Howard, Jennifer Hudson and Jessica Barden, tear-inducing Lullaby won’t put you to sleep.

8. The Rover
Release Date: (Limited) June 13, (Nationwide) June 20
Distributor: A24
This film is set in a near-future dystopic Australia 10 years after the collapse of society. Eric (Guy Peirce) is wandering around the desert when a gang of bandits steals the last possession that means anything to him: his car. He then must enlist the help of one of the younger, more naïve members of the gang, played by a very dramatic Robert Pattinson, to get his car back. The backdrop of the rugged Outback landscape sets the tone of desperation nicely and allows the viewer to feel the desolation of this not-too-distant future. The Rover by no means is uplifting, but the film does seem to be saying something deep about the human condition.

9. Le Chef
Release Date: June 20
Distributor: Cohen Media Group
This culinary comedy is about a self-taught, talented, aspiring chef who teams up with a star chef in danger of losing his reputation to journey the world of French haute cuisine. Together, they balance between tradition and trend as they try to come up with new dishes. Although this a foreign language film with subtitles, that doesn’t mean it’ll be short on laughs. Directed by Daniel Cohen, Le Chef features tasty foods as well as appetizing dialogue.

10. Snowpiercer
Release Date: June 27
Distributor: Radius TWC
Chris Evans (Captain America, Avengers), Jamie Bell (The Fantastic Four 2), Tilda Swinton (Only Lovers Left Alive), Ed Harris (A Beautiful Mind) and Octavia Spencer (The Help) star in this sci-fi epic from director Bong Joon-Ho (The Host, Mother). In this film, global warming has reached its boiling point. After a failed global-warming experiment kills off most life on Earth, survivors board the Snowpiercer, a train equipped with classrooms, a greenhouse and more. However, there’s a hierarchy on board, where some survivors are permitted to stay in the front of the train while others most stay in the back—that is, until some passengers revolt. With a ton of action, some violence and great cinematography, Snowpiercer makes a very entertaining summer movie.

11. The Fluffy Movie
Release Date: July 11
Distributor: Open Road
No, this film isn’t about marshmallows or clouds. And no, it’s not a cartoon either. It’s a comedy concert, featuring comedian Gabriel “Fluffy” Iglesias (Magic Mike, A Haunted House 2). Iglesias, who wants you to know that he’s “fluffy”—not fat, is an American stand-up comedian who has sold out concerts across the U.S. and even abroad. His jokes are generally pretty tame and clean for the most part, but some jokes do have an appreciated dirtiness to them. Since this film has not yet to be rated, we’re not sure if it’s for the whole family. Still, The Fluffy Movie will offer the comedic relief you need after a stressful semester at school.

12. Affluenza
Release Date: July 11
Distributor: Filmbuff
What happens when an aspiring, middle-class, college-bound photographer moves into the world of the rich and privileged? Three things: 1) he buys high-quality weed, 2) he goes to hard-core parties, and 3) he has access to plenty of booze and casual sex. Well, at least that’s what happens in Affluenza, a film that takes place in the summer of 2008. After the financial crisis hits, those who once indulged in a glamorous lifestyle soon find themselves struggling to keep relationships together and dealing with privilege’s perils. Starring Ben Rosenfield (“Boardwalk Empire”), Gregg Sulkin (“Faking It”), Nicola Peltz (Transformers: Age of Extinction), Grant Gustin (“The Flash”), Steve Guttenberg (“Veronica Mars”) and Samantha Mathis (“Under the Dome,” American Psycho).