Dodgers Rally, Only to Lose to Giants in 10 Innings 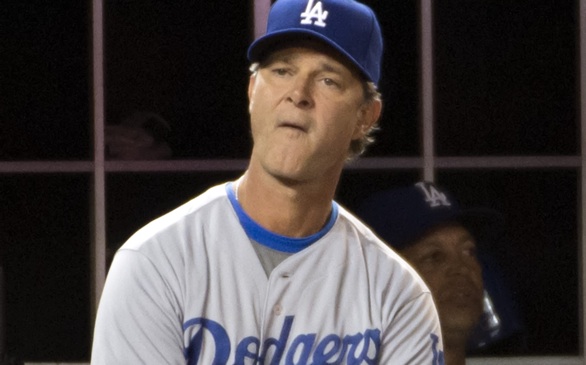 Depending on who you ask in the clubhouse, the Dodgers are either close to turning a corner or sagging on several fronts.

Either way, there is room for improvement. Sunday’s loss, 7-4 to the San Francisco Giants, was the Dodgers’ sixth loss in their last eight games. By winning three of four in the series, the Giants increased their lead to 4 1/2 games in the National League West over the third-place Dodgers.

“We see good and bad with this series so far,” Dodgers manager Don Mattingly said. “There’s areas we have to get better. We’ll keep after it. It’s just kind of the way teams get molded, right? You keep going, and you keep trying to get what you want. You keep asking and if you don’t get it, you ask a different way.

“Guys step up. Guys step sideways. Guys step out. We’ve just got to keep going for what we want. That’s every year, though. The team kind of gains an identity. Hopefully we can just play more consistently.”

Mattingly hoped that a closed-doors team meeting Thursday would do the trick. At times it did.

Saturday, the Dodgers rallied from a 2-0 deficit to win 6-2.

Sunday, the Dodgers erased deficits of 1-0 and 4-2 — the latter on a home run by Hanley Ramirez with two outs in the bottom of the ninth inning — before losing in the 10th inning when Kenley Jansen imploded in a 4-4 game. The Giants scored three runs off the Dodgers’ closer, who recorded only one out before he was removed.

Jansen took a step back. Ramirez took a step forward. Yasiel Puig (2 for 5) hit a solo home run with his mother in attendance on Mother’s Day. Clayton Kershaw allowed a two-run home run on a rare hanging curveball to Brandon Hicks that temporarily put the Giants ahead 3-2 in the seventh inning.

With the Dodgers’ star players wandering in different directions, it’s no wonder there was a meeting to get everyone on the same page.

“I think over the past few days it’s slowly gotten better,” Kershaw said following his first appearance at Dodger Stadium this season. “Today I feel like we really played good baseball.”

And yet, Dodgers outfielder Andre Ethier said that “a lot of things from top to bottom” need fixing.

“We still have a lot of tweaking to do ... whether it’s making the defensive plays or getting guys in on offense or making the pitches,” he said. “Those guys across from us there, you can see how giving them an extra pitch, not picking up a runner on base, not getting them in from third can come back and get you, and you end up losing a game like that.”

The Giants have won seven of 10 head-to-head games against the Dodgers this season.

Kershaw allowed seven hits and three runs, all earned, in seven innings. He walked none and struck out nine before an announced crowd of 51,369.

Before Hicks’ home run, Kershaw had only allowed three home runs on 0-2 counts in his seven-year career prior to Sunday. Only one opponent had ever homered off a Kershaw curveball, according to the website BrooksBaseball.net, and that was in 2009.

“For me to give up that home run after just getting the lead right back is disappointing,” Kershaw said. “The team played so well and I kind of gave it up there at the end. It was a frustrating thing.”

Giants starter Tim Hudson was a bit sharper — at least when Ethier wasn’t batting. In his first start since Wednesday, Ethier went 3 for 4 with an intentional walk and two doubles.

But the Dodgers ran into a pair of outs at home plate and could only score two runs on eight hits in six innings off Hudson.

Puig’s home run to lead off the seventh inning tied the game 1-1. The next batter, Ramirez, shot a ground ball through a heavily stacked left side of the infield, then alertly took second when the Giants were slow to cover the base. Adrian Gonzalez’s single drove in Ramirez and gave the Dodgers a 2-1 lead.

Ramirez’s two-run home run in the ninth inning off Sergio Romo (3-0) handed the Giants’ closer his first blown save in 13 chances this season.

Jansen (0-2) was no better in the 10th inning, loading the bases without recording an out. Pablo Sandoval’s single through a drawn-in infield served as the game-winning hit.

J.P. Howell got the final two outs, but not before throwing a wild pitch that allowed the Giants to score their seventh run.

Howell and Jansen co-lead the major leagues in appearances with 22. Mattingly said he’s confident the workload hasn’t taken a toll on either pitcher. Jansen said he felt fine physically.

Yet Jansen admitted later that the pressure to maintain consistency caught up with him Sunday.

Often, his performance is clearly tied to rest. Other times it isn’t. Sunday was the first time he’s given up a run with more than two days of rest between appearances.