PHOTOS - Twenty One Pilots: May 9 @ The Wiltern 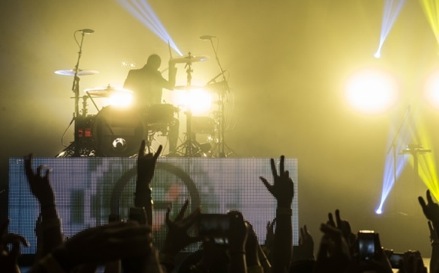 Ohio band Twenty One Pilots took over the Wiltern Theatre Friday night with a blast of energy in front of a sold-out show.

The crowd consisted of fans in their late teens to mid-20's, and they screamed and recorded the entire show on their cell phones. The pit in the front of the venue was full to capacity, and every hand was in the air to wave or take a picture.

But first, opening band NONONO took the stage. Known for “Pumping Blood,”  this band got the audience warmed up with its fairly "pop-y" set.

When Twenty One Pilots finally came out, band members Tyler Joseph and Josh Dun (both wearing ski masks) were back lit by an impressive, shock-inducing light show.

Immediately thereafter, the drummer (Dun) became explosive, creating a high-energy tone from up on his drum pedestal onstage.

Meanwhile, Joseph occupied the entire stage, thriving under the lights and sounds of the screaming fans.

When the ski masks came off, the changes continued from skull hoodies to a flowing robe accompanied by a ukulele. Visually, it seemed as if the audience was experiencing a different show from a different band during each song. The creativity was flawless and exciting.

Twenty One Pilots will be continuing their tour well into October. They will be playing with bands such as Panic! At The Disco and Fall Out Boy before returning to L.A. to play the Palladium.