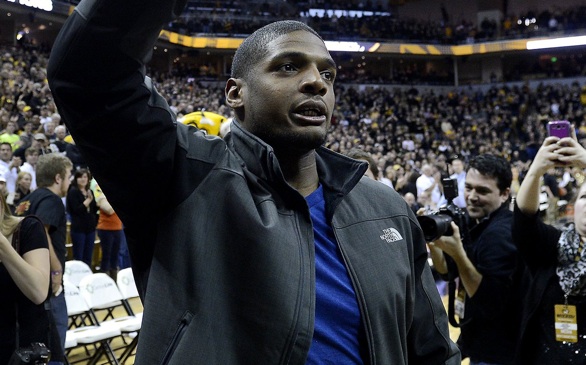 When former University of Missouri defensive end Michael Sam was selected to the St. Louis Rams during the NFL draft on Saturday, Sam celebrated like any human being would: he kissed his significant other.

However, his significant other happens to be a man, and because of this, the football player is facing homophobic backlash.

Sam openly came out about his sexuality earlier this year, so it really shouldn't be a surprise that he has a boyfriend and that he likes to kiss his boyfriend. But that didn't stop people, like former Ole' Miss basketball star Marshall Henderson, from spewing out hate.

"Boycotting sportscenter til this michael sam nasty ass sh*t is off. My brothers are 7 and 11 and saw that!!! #SICKENING," tweeted Spencer after seeing Sam's post-draft kiss aired on TV.

TMZ reports that the basketball player has since backtracked his statement, claiming that the tweet was part of a "psychology experiment."

"One of my best friends, WHO IS GAY, is about to graduate in psychology, asked me to say these things so he can have responses," Henderson tweeted. "The point of his study was to see how people react when others say things or act a certain way against another group of people. Sorry for messing with everyone like that!!!  Everyone really helped my boy AND FOR THAT WE ARE EXTREMELY APPRECIATIVE!!!"

In other Michael Sam news...the fact that Sam was drafted to a Missouri football team raises questions about the state's current laws that affect openly gay employees. Reportedly, employers are legally allowed to refuse employment to an individual based on that individual's sexual orientation. Employees can also be fired for being gay, lesbian or transgender.

So, the Missouri Nondiscrimination Act (MONA) is aiming to protect LGBT community members from experiencing discrimination in the workplace.