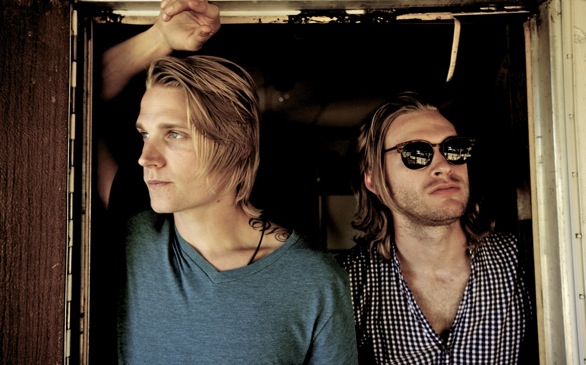 Only a few years in the making, Jamestown Revival is hitting the music scene by storm.

The love child of two childhood friends, Jonathan Clay and Zach Chance, this duo is shaking up the music industry by bringing beautifully soft sounds, sparking rhythms and heartwarming vocals to fans across the country.

As part of its upcoming nationwide ‘Utah’ tour to promote its debut album of the same name, Jamestown Revival will be playing a sold-out show in Los Angeles at the Troubadour on May 29.

Before the two hit the road, Campus Circle was given a chance to catch up with the artists.

With the big ‘Utah’ tour coming up and Los Angeles show already sold out, what are you two most looking forward to?
Zach: Getting to play the festivals. It’s going to be the first time we’re going to get to play these festivals. That’s really exciting. And the fact that this is going to be our first headline tour.

You’ll be playing Hangout Music Festival in Alabama, correct?
Zach: We’ll be playing Hangout, and we were lucky enough to sneak into Bonnaroo as well. From a music fan standpoint, we’re pretty pumped…the same for Hangout. Anytime you get to be on the bill with so many of those other names, makes us feel [like] maybe we’re not crazy and somebody likes our music.

Have you played any festivals before?
Zach: Not of this caliber.

I wondering if you guys could tell me a little bit more about that log cabin up in Utah (where the duo recorded its album, Utah)?
Jonathan: You know, Zach and I are very inspired and influenced by the mountains and the wilderness. We lived in L.A. for almost three years, and we wrote these songs about the entrapment of the city and the stresses of life and that feeling of displacement and longing for home. We thought, you know, we could get into a studio in Los Angeles, but then we’re really kind of still surrounded by all the things we sing about escaping.

So, we thought how nice it would be to get up into the woods and into the mountains and record in the cabin. We found a cabin in Utah, and we hauled a whole bunch of gear from Los Angeles to north of Park City to the Wasatch Mountain range, just over 6,000 feet in elevation.

We recorded all the tape with an old tape machine—no headphones and no quick track. It was pretty old school. Our upmost priority was capturing that energy in the room and capturing that performance, making people feel that they were listening to a live performance of what we do.

Zach: Being able to get up there and live and breathe it for a couple of weeks seemed a lot more logical than going to a studio and sitting in traffic on the way home, mentally taking yourself out of the place you just were. It’s just the fact that you can live it and breathe it.

Tell me about the team you guys assembled in the cabin. The promo video looked like a pretty fun group.
Jonathan: Man, it was awesome. Zach, you want to tell him about it?

Zach: One overlying thing about Jamestown is we just have really talented friends, and we’re lucky. From the guy that shot the video (Matt Sanders), to Daniel Dempsey and Ryan (Lipman), who helped engineer it and mix the record, they’re all friends. We paid for this record ourselves, so we kind of persuaded them to go out on a cheek.

Basically we just hung out, living in a cabin for two weeks, and just doing it the way we were doing it. Luckily everyone was on board. We had those guys, and Nick (Bearden) and Ed (Benrock), who play drums and bass. We picked those guys up in California, and they were on board as well. It was a pretty tight-knit group; it was a really fun time.

What cities are you most excited to play for the ‘Utah’ tour?
Jonathan: San Fran, aside from L.A. A sold-out show at the Troubadour is amazing.

Aside from the obvious ones, San Francisco’s Great American Music Hall. The presales are going pretty good; we’re pretty surprised. Washington DC is going to be a good show and Boston. There are some markets that are really surprising us. People are coming out and buying tickets. We’re very humbled.

Where do you guys find your best fans, the most energy from the crowd?
Zach: Shit, Los Angeles has been so good to us. I don’t know if we could beat that right now.

When you guys are up on stage, where do you draw your energy?  Do you seek it from within yourself and the music or more of the crowd?
Zach: Other than drugs and alcohol, when the people are engaged it is so much easier to be energetic. And when we’re feeding off each other and the crowd at the same time, you kind of loose yourself in it, and it’s just a really fun experience.

Speaking of drugs and alcohol, what is your drink of choice on the tour?
Jonathan: That’s going to be some whiskey. Yeah, and if it’s a cocktail, we're drinking old fashions.

Zach: Whiskey and a steady dose of beer.

Any funny tour stories you’d like to share with fans?
Jonathan: Our tour bus is actually a prison bus that we converted to be a tour van. We retrofitted the insides to the fifth degree and put in wood floors and wood ceilings. We covered it all in wood because it was covered in diamond plate steel, because it was obviously meant to keep people in.

So, when we went on a tour in the prison van, before we had a chance to fix it up inside, it was so cold in there. We just built quick little bunks with sleeping bags; it was so cold. We got stranded in a Walmart parking lot because our battery died one night, and while waiting there for the tow truck, the bottle of water I had sitting next to my bunk bed froze.

But, the tour van is in full steam now and ready to roll around the country.  We’re proud of our baby.

On the tour, would you guys consider putting any covers into your set list?
Zach: Yea we have a few tricks up our sleeve for this one. We don’t want to rely too heavily on covers, but we love to pay homage to people who do it a lot better than us. Another cool thing is that we don’t typically write out a set list; we just try and read the energy of the room, and then just take it from there. But it does change from night to night, which is fun for us, so it’s not the same set over and over.

If you guys had to cover an entire album for a show, what would it be?
Zach: I know what I’d say. My vote would be the Waylon and Willie record.  I wouldn’t even bat an eye.

Outside of the big music legends, are there any smaller low key artists you guys grab inspiration from?

Jonathan: We’re big fans of Ryan Adams. We just went on tour with the Wild Feathers. We have a real admiration for those guys—really love those guys.

Zach: We typically listen to a lot of older stuff, but I was recently turned onto Hurray for the Riff Raff. They do some really cool stuff. It really just depends…the Black Lillies, for sure.

As you guys are both very talented musicians with a great breath of style and talent, I was wondering if you had any opinion on the electronic dance music scene going on right now amongst the youth of America?
Zach: We’re probably not the best judges of that. I can’t say I find the inspiration for it, but that doesn’t mean much of anything, because there is a shit load of people going to their concerts. So maybe we just missed the boat on it.

Jonathan: To be honest, I think a lot of the times people just don’t want to think. When you listen to that music, it doesn’t make you question your purpose, doesn’t make you think about anything below the surface. It’s just a party. It’s definitely the upmost antithesis of our music you can find, and I think we’re proud of that.

Zach: I think if we tried to do EDM, we’d fail miserably. So, you know, there is something there and people gravitate towards it, but to me it just seems like such an instant gratification thing. But that’s kind of the world we live in these days, so I get why so many people are drawn to it. But, like what John was saying, I don’t know if it necessarily causes you to go into deep thought.

Jonathan: I’m going to be not as politically correct as Zach and say I think it causes you to go into anxiety and one you’re forced through.

Zach: It probably depends on what drugs your on while you’re there—it may not be because of the music.

Jonathan: You can almost compare it to the disco, new age disco. I’d say disco has more of a human element of music with it.

Zach: If I could choose to have a conversation with an EDM fan or one who is a fan of WILCO, I’d probably choose WILCO seven days of the week.

Any cool surprises we can expect in at the L.A. show?
Zach: Man, we’re pulling out all the stops. We’re so f*cking excited that the show’s sold out. I don’t think we’re going to hold back at all; it’s going to a fun show. Surprises will unfold themselves as we go along.

Zach: You have to let the universe guide you.

Jamestown Revival will be playing at the Troubadour on Thursday, May 29, 2014.