Jon Hamm and Disney Roll the Dice on a Hollywood Comedy 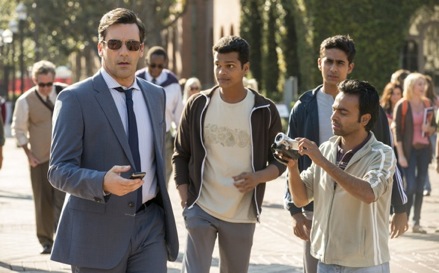 Sports agents, as Jerry Maguire taught us, make their mark by finding value where others don’t see it.

That’s the hook to Million Dollar Arm, a Disney movie about a real-life agent — J.B. Bernstein — who decides the answer to his bottom-line is finding future Major League Baseball pitchers amongst the millions of young cricket bowlers of India.

No, they don’t play baseball in India. There’s no system set up to scout for baseball talent. And the simple mechanics of hurling a cricket ball, a straight-armed (no bent elbow) motion augmented by taking a running start, isn’t much like a pitcher’s motion at all.

But Bernstein found an investor, created an “India’s Got Baseball Talent”-type contest and brought in a baseball scout to find out who might have a Million Dollar Arm.

“What he realized was that in a country that big, there was talent out there — athletic ability,” says Jon Hamm, who plays Bernstein in the movie, which opens Friday. “The problem is simply that there isn’t a value, over there, placed on being able to throw this ball the way we do over here. What he figured out, wisely, was that there are a billion kids in India and you’ve got to figure that are some who have the build, the raw athletic ability, to be able to throw a baseball at major league speeds.”

In other words, “Juice’ (pitching velocity) is juice. It’s quantifiable,” Hamm says. “This kid can bring it, or he can’t. ‘We can teach you the rest.’ The reality of the story was a guy thinking so outside of the box, and having his gamble pay off.”

The agent he’s depicting in the film, the real Bernstein, was beyond flattered that a guy with Hamm’s Hollywood heat elected to play him in the movie. The Access Group sports agency founder got to relive his story — with all its wince-worthy moments — with a rising A-list star driving his Porsche, wearing his desperation and making his same mistakes.

Bernstein shakes his head over it all now. Especially that first, slapped-together big league showcase for his Indian stars, staged in a parking lot (no ballpark would allow this “stunt”) in Arizona,

“I watch that scene and I am right back there in Arizona watching the train wreck I created unfold,” Bernstein says. “By far, the worst day of my life. Jon really captured what I felt like that day.”

Another gamble in Million Dollar Arm is the one the actor is taking. Hamm, 43, is trying to set the table for his post-“Mad Men” career with a culture-clash comedy in which he plays straight man to Alan Arkin (as a jaded scout) and a trio of Indian village boys thoroughly lost when J.B. brings them to Los Angeles to prep them for a big-league tryout.

“The tone of the film helps me find J.B., who is significantly different from Don Draper (from “Mad Men”),” Hamm says. “The emotional journey that he takes is beautiful and uplifting and inspiring, even. Heartwarming. Not one of those words has ever been used to describe Don Draper. Ever.”

Hamm laughs. Even though his “sexiest man alive” chiseled good looks convinced Hollywood that “straight arrow” characters — cops and federal agents (The Town) — might be his future, he’s drawn to comedy. He’s been in a long-term on- and off-screen relationship with comic actress, writer and director Jennifer Westfeldt (Kissing Jessica Stein). His turns on “30 Rock” and appearances on “Saturday Night Live” show he can find the funny. And he laughed at the idea of playing Bernstein.

“I get to play a ‘fish out of water,’” Hamm says of his high-living agent out of his depth in India. “You go to India, you can’t figure out how anything works. You’re in the middle of this sea of people and cars, in traffic. Bureaucracy. And it works. Wow. J.B.’s reaction to that is like any American’s reaction to things working in that chaos — pretty funny.”

A third gamble? Disney is reaching for that huge Indian market with a film about an agent who sold MLB on the same idea — gambling that there’s money to be made on those Bollywood-loving billions in South Asia.

“Our biggest concern was, we didn’t want to offend anybody,” Hamm says. “We didn’t want the Indian characters as cartoonish cliches. Craig (Gillespie, director) walked a very fine line with that. But you can say that and show that without offending people ... You want to be culturally sensitive at all times. Bollywood films and Indian cinema is a lovely art form, beautiful. It’s also very specific to that culture. But plainly there is a place for Hollywood in India.”

No Indian player recruited by J.B. Bernstein has yet made it to the Major Leagues, with the earliest successes still being in the minor league system. But given time, the odds are that one could. Visit any major league ballpark this year and it’s pretty obvious the game need to find fresh pitching blood — somewhere.

Hollywood’s product already makes inroads into the Indian marketplace, even with films that aren’t tailor made for that audience.

And Hamm’s gamble? It’s hardly an all-or-nothing shot. A summer comedy about India and baseball might not seem like a sure thing, and a James Franco-directed adaptation of William Faulkner’s The Sound and the Fury, which Hamm has finished, seems even less commercial. But heck, he might even do another TV series, limited run or otherwise.

“I would never say no to doing another TV show,” he says. “I love doing it and the opportunities there are more exciting than they’ve ever been.”

And if his lady friend and in-demand muse Westfeldt can squeeze in the time, “I’m sure she”ll put something on paper and we’ll pour our energy into making it. As hard as it is being a sports agent, or getting an acting career going, getting an independent film written, cast, financed, made and distributed is even harder.”