Clippers Again Must Try to Cut Through ‘Clutter’ Created by Sterlings 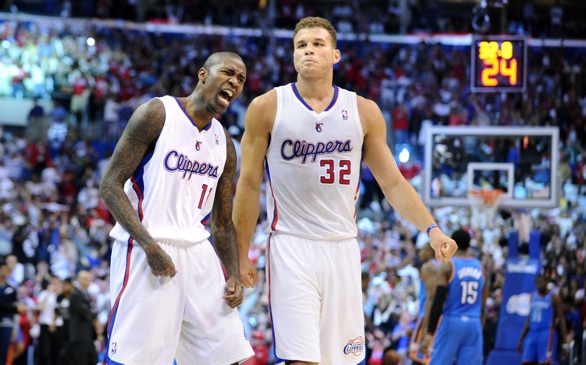 LOS ANGELES — The focus for the Los Angeles Clippers should be on the Oklahoma City Thunder and Game 5 of their playoff series Tuesday night.

But the Clippers once again have been forced split their attention between the Thunder and what coach Doc Rivers calls the new “clutter.”

Instead of putting their full concentration into trying to figure out how to slow down Kevin Durant and Russell Westbrook and win the next game in a best-of-seven series that’s tied at 2-2, the Clippers are back to dealing with fallout from remarks by Donald Sterling and his wife, Shelly.

Instead of just talking about Chris Paul and Blake Griffin, and whether the Clippers can carry the momentum of their thrilling Game 4 comeback victory Sunday into Game 5 at Chesapeake Energy Arena, Rivers was forced to also talk about the Sterlings and their television interviews.

“Like I’ve said, I think it’s individual clutter, it’s not team clutter,” Rivers said Monday afternoon during a conference call with reporters. “I think there’s a couple of guys that I’m sure it affects. One day it does, one day it doesn’t.

“The bottom line is I’m just not sure. If I get the feeling like it’s something that needs to be controlled or handled, then we try to do it internally. I’ll find out (Tuesday). I’m sure all of our guys will hear more over the next 12 or 14 hours.”

In separate interviews, Donald and Shelly Sterling both indicated that they would fight to keep the Clippers.

During his interview with CNN’s Anderson Cooper that was broadcast Monday, Donald Sterling apologized for his disparaging remarks about blacks. “I’m not a racist and I’ve never been a racist,” Sterling said during the interview.

Rivers said he was aware that Sterling apologized.

“He probably should have done it right away,” Rivers said.

Shelly Sterling told ABC’s Barbara Walters on Sunday she wants to keep her 50 percent share of the team. If the NBA tries to force her to sell her interest in the Clippers, “I will fight that decision,” she told Walters.

Two weeks ago NBA Commissioner Adam Silver fined Donald Sterling $2.5 million and banned him for life from the NBA after the release of an audio recording in which Sterling made racially charged remarks. Silver is also trying to get the required three-fourths vote from the other NBA owners to force Sterling to sell the Clippers.

This is the clutter Rivers referred to that his team must deal with again.

“It’s stuff that you as a coach would obviously like not to have to even look for or deal with, but it now has become part of our playoffs,” Rivers said. “I think that’s the way we view it. It’s just part of the process that we’re going through.”

Rivers was also asked about the comments Donald Sterling made about Magic Johnson, who attended Sunday’s game at Staples Center.

During his interview on CNN, Sterling said Johnson wasn’t a good example for the children of Los Angeles and hadn’t done enough for the minority community.

“Obviously I know who Magic is,” Rivers said. “I’ll stand by Magic every day of the year because I’ve known him for a long time.

“Having said that, I don’t know what’s going on out there. I tried not to get involved in that part of it right now. Whatever it is, that doesn’t sound like much of an apology to me.”

Paul suggested that the Clippers can’t carry that momentum to Game 5.

“At the end of the day, we’re going to start the game 0-0,” Paul said after Sunday’s game. “We’re going to their place. I think we got to bring that same energy and mindset. … We just have to understand that sometimes you just have to impose your will, just play hard.”