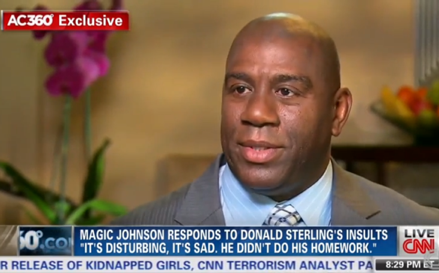 Magic Johnson, the target of Donald Sterling’s bizarre attacks, said the Clippers owner is fighting a battle that he cannot win.

In an interview with CNN’s Anderson Cooper on Tuesday, the NBA Hall of Famer and Dodgers part-owner insisted that he would not hold a grudge against Sterling but was upset and disappointed by the Clippers owner’s comments — saying that the 80-year-old is still “living in the Stone Ages” and must be ousted from the league.

“I just feel sorry for him,” Johnson told Cooper. “I really do. It’s just sad.”

On Monday, CNN aired an interview in which Sterling apologized repeatedly for racist comments he had made to female friend V. Stiviano, audio of which was published by TMZ more than two weeks ago. In the clip, he is heard telling Stiviano not to associate with African-Americans, including Johnson, and to not bring them to Clippers games.

NBA Commissioner Adam Silver subsequently banned Sterling from the NBA for life and fined him $2.5 million. The league is currently in the process of forcing Sterling to sell the team, which would require a three-fourths majority vote by the NBA Board of Governors.

However, he also used his Monday interview to doubled down on bashing Johnson, questioning whether the former NBA star had done enough to help the African-American community and whether or not his HIV-positive status made him a good role model for Los Angeles children.

Sterling also accused Johnson of calling him after TMZ first broke the controversy and asking him to remain silent, perhaps with the hopes of buying his franchise. Though Johnson said he and his business partners may be interested in buying the Clippers down the road, he denied trying to lull Sterling into any sort of trap.

“If I was going to trick somebody, deceive somebody, be dishonest with somebody, try to steal somebody’s franchise — it’s going to be the Los Angeles Lakers,” Johnson told Cooper.

Johnson added that it was Sterling who first called him more than a week ago. When that happened, Johnson said he asked him apologize to the public and suggested it would be a good idea to consult with his attorneys.

Instead, Sterling suggested that Johnson appear with him on an interview with ABC’s Barbara Walters.

“He was adamant about me going on this show with him,” Johnson said. “And I wouldn’t do it.”

He defended himself from Sterling’s claim that he had done “nothing” for minorities, pointing to the businesses and college scholarship opportunities he has helped create in inner cities. And while some have criticized Johnson for endorsing questionable businesses, the Lakers legend’s status as an African-American icon is almost undeniable.

On Monday, Sterling also repeatedly and wrongly stated that Johnson has AIDS, catching it after he “made love to every girl in every city in America.” Johnson announced he was HIV-positive in 1991 and retired for good after two comeback attempts but has since worked to raise money for and reduce stigma surrounding the disease.

“I came out like a man,” Johnson told Cooper. “You know, I told the world. I didn’t blame nobody else. I understood what I did was wrong.”

Some weren’t surprised that Sterling’s claims were quickly rebutted.

“He has a proclivity for saying whatever, whenever, that he needs to say to make his point,” attorney Carl Douglas — who represented Elgin Baylor in a discrimination lawsuit against Sterling — said later on CNN. “I think he lied under oath. I’m almost certain he lied under oath, not only in deposition, but in a trial.”

When Cooper asked Johnson what he would want to say to Sterling, he responded plainly.

“You’re 80 years old,” Johnson said. “You’ve had a tremendous life. You’re going to benefit (from) whatever the price tag is from this team selling. Just go ahead and enjoy the rest of your life.”

Special Feature
What would sports look like with smaller or no crowds?
511 views

Special Feature
He made most of his gap years: Capehart, 85, gets degree from USC after starting in 1952
382 views